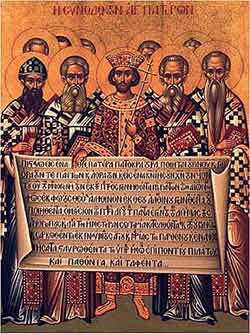 My post discussing the value of not using the Nicene Creed at ordinary Sunday Eucharist received good discussion. Thank you. Some of that discussion was picked up on other sites as well (eg. here, here, and here).

Some people just went off on their own passion about clergy who do not believe in the faith expressed by the Creed, crossing their fingers while saying it, and so forth.

Read my lips: I personally adhere to and teach the faith expressed in the Creed. I have publicly declared my allegiance to it, made formal vows in relation to it, and signed declarations that I continue to adhere to. I teach the Creed, preach on the Creed, catechise about the Creed, and this post is part of a series that is encouraging your own reflection on the Creed.

[Do I really have to add a rider in a culture that is agile in metaphor except when it comes to religion that, yes, there is metaphor in the Creed, and, no, I do not think that God the Father really has a right hand? We haven’t come to that line yet. Sadly I may just have to add that rider.]

I repeat here my primary point: we have restored the community’s celebration of the mighty acts of God into the community’s Eucharistic Prayer where they belong. When they were absent, the community used something that was never intended for that purpose: the Creed. May I repeat what I said on another site to the suggestion, “I wonder what’s wrong with having it done twice?”. To this I responded:

The best thing for banging a nail in is to use a hammer. When the hammer was withdrawn, yes a wrench can be used for that purpose – but it wasn’t what the wrench was designed for – and it does it badly, but the hammer was gone. After centuries of the majority of people using the wrench to bang nails in, with the return of the hammer it is understandable that it will take some time for people to come to realise that actually the hammer is the one to do the nail-banging job. And the wrench can go back to being used for its original purpose. Encouraging people that they can still bang nails in with the wrench as well as the hammer misses, pardon the pun, the point.

I was grateful to receive an email from Fr Donald Schell. He attached a document from Fr Rick Fabian arguing not to use the Nicene Creed regularly in the Sunday Eucharist. I am grateful to have permission to quote from this. I will quote part of it in this post, and part of it in a future post:

RECITING A CREED AT THE EUCHARIST HAS BECOME SUPERFLUOUS.
Some voices for reciting this Creed at the main Sunday eucharist argue it expresses our faith and identity, even if some terms are obscure to believers, or that it supplies a doxological response to the liturgy of the Word. Those are worthy actions; but both those actions now happen in our growing body of Great Thanksgiving Prayers, where they naturally belong, and where they speak more understandably. Anglican prayer books made this conscious change in concert with Roman Catholic and Protestant liturgists of the Vatican II era, who chose Syrian prayer models retelling the story of salvation, above the Roman Canon model mentioning only Jesus’ Last Supper and death, or Reformation reforms refining sacramental theory. Several modern Great Thanksgiving prayers explicitly quote language from ancient creeds in addition to the so-called “Nicene.” There is no need to do this job twice; and relying on the Great Thanksgiving prayers for this job has advantages I will return to below. [This will be in a future post]

RECITING A CREED AT THE EUCHARIST HAS A SECTARIAN HISTORY.
Some opponents of reciting a Creed during the eucharist object that it raises an unfriendly boundary in today’s pluralistic religious marketplace. But pluralism is not the issue, because the problem is older. Ancient councils wrote creeds for harmonizing teaching, never for liturgy. So far from proclaiming an orthodox identity, reciting Creeds at eucharists began as a deliberate schismatic shibboleth to defy orthodoxy. Gregory Dix tells the story in The Shape of the Liturgy (1945). Peter the Fuller, patriarch of Antioch, led the losing Monophysite party at the Council of Chalcedon (451). He claimed earlier councils had affirmed the first council, at Nicaea, whereas Chalcedon had betrayed it. Upon returning home, Peter inserted another recent council’s creed (II Constantinople, 381) into the liturgy just before the sursum corda, so local worshippers must affirm these councils, and not Chalcedon, before they could proceed to consecration and communion. The orthodox majority eventually deposed Peter, but dared not remove his new Eucharistic creed for fear of lending his charges substance. Latins and Anglicans who label the text “Nicene” unwarily grant Peter’s point—whereas the Byzantine rite never does so, but styles it only “the Symbol of the Faith.”

Today despite efforts to set the Creed’s recitation in a positive light, its sectarian feel endures palpably, and unchurched people recognize that feel even if they don’t know how it got there. As Commission Co-chair I often hear from parish clergy whose newcomers object that the “Nicene” Creed makes them uncomfortable—whereas I never hear complaints about the Great Thanksgiving Prayer, which recites the same content more concretely and often at greater length. [There will be a further quote from this text of Fr Rick in a future post]

This is the tenth post in a series on the Creed. 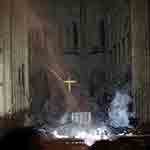 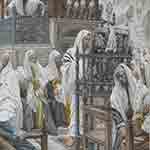 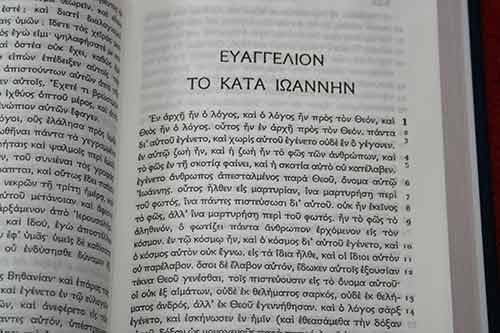 No Old Testament in the Easter Season?