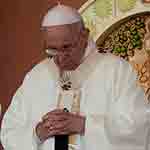 THE HANDS when not engaged should be held joined palm to palm before, but not resting against, the breast; the fingers extended and close together, pointing slightly upwards; right thumb over left; elbows touching the sides of the body. (Ritual Notes, 9th Edition, 1946)

There was a discussion about hands and crossing thumbs on the social media sites associated with this site. [Thanks to all those in the discussions.] And so I went back to the rule books. Details down to which thumb crosses which are not high on my list of concerns! You won’t find it in my book Celebrating Eucharist. Christian praying hands is holding them extended in orans.

Hands joined means holding the palms sideward and together before the breast, with the right thumb crossed over the left. (Ceremonial of Bishops 1989, 107n80 – quoting Cæremoniale Episcoporum 1886)

Obsession with such rules and minutiae is, tragically, exactly what many people think of when they hear the word “liturgy”.

Interestingly, when I went back through photographs, I found the (recent) popes generally ignore this rule. They generally knit their fingers. I needed to go back to Pope Pius XII (pre 1958) before photos showed more regular holding of hands in this manner. Someone else can do the same with Archbishops of Canterbury.

The discussion leads to the science of “hand clasping”:

Although some people do not exhibit a preference for one type of hand clasping, most do. Once adopted, the method of hand clasping tends to be consistent throughout life. When an individual attempts to clasp the hands in the opposite configuration from the usual one, that person may feel a sense that something is out of the ordinary.

Claims to the contrary notwithstanding, hand clasping is not solely genetic. Claims, in the social media discussion, that right handed people naturally put right thumb over left – are false.

Pope Francis (above) is clearly L. 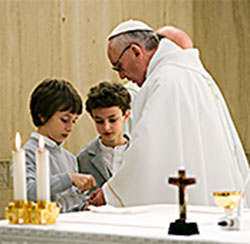 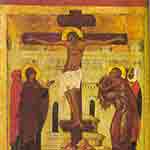 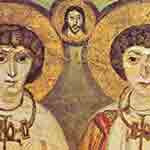