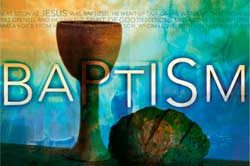 The General Convention of The Episcopal Church (TEC) has just been meeting. It debated whether baptism is normally required before receiving communion. Or should Christ’s table be open to everyone, baptised or not?

I have written about this previously, and if you want to look back at that discussion, read “Baptism – communion – in which order?”

I want to add to that linked discussion the idea of Baptism and Communion being integrally connected. I have written here before about that connection – with Baptism-and-communion being one event/celebration/sacramental action (whatever term helps you), and communion being the repeatable part of that.

This connection is not fanciful. It is there in the earliest layers of our tradition. It is continued in the Eastern part of the Christian tradition, and is being rediscovered in some parts of the West. The connection is seen in the biblical records, eg. 1 Corinthians 10:

2 and all were baptized into Moses in the cloud and in the sea,
3 and all ate the same spiritual food,
4 and all drank the same spiritual drink. For they drank from the spiritual rock that followed them, and the rock was Christ….
6 Now these things occurred as examples for us, so that we might not desire evil as they did.

TEC has restated the status quo. This is not about specific pastoral situations. And I want to emphasise (and this should be clear from the earlier post I refer to) I have the greatest respect for those who practise an “open table”. TEC was not prepared to sever the traditional link.

In my own context – I wonder if there needs to be more discussion about an “open font”? Where on community websites (diocesan websites), pamphlets at the door, teaching from the pulpit, regular community practice, etc. is there help/challenge/encouragement to baptism? I still see evidence, despite the formal teaching of my church that baptism is admission to communion, of rites, practices, teaching etc. which places a boundary between the baptised and Christ’s table, let alone the unbaptised and that table.

In TEC the original resolution, proposed by the Diocese of North Carolina, called for study of the relationship between baptism and communion. It went first to the Evangelism legislative committee, then to the House of Deputies, then the to the House of Bishops.

C029 as originally proposed:
Resolved, the House of _______ concurring, That the 77th General Convention direct the Presiding Bishop and the President of the House of Deputies to appoint a special commission charged with conducting a study of the theology underlying access to Holy Baptism and Holy Communion in this Church and to recommend for consideration by the 78th General Convention any amendment to Title I, Canon 17, Section 7, of the Canons of General Convention that it deems appropriate; and be it further
Resolved, That the General Convention request the Joint Standing Committee on Program, Budget and Finance to consider a budget allocation of $30,000 for the implementation of this Resolution.

C040 as originally proposed:
Resolved, the House of _______ concurring, That The Episcopal Church ratify the rubrics and practice of The Book of Common Prayer to invite all, regardless of age, denomination, or baptism to the altar for Holy Communion; and be it further
Resolved, That Canon 1.17.7: be deleted: [Sec. 7 No unbaptized person shall be eligible to receive Holy Communion in this Church.] and Canon 1.17.8 be renumbered Canon 1.17.7.

C029 was amended into this form and presented to the Deputies:
Resolved, the House of Bishops concurring, that The Episcopal Church reaffirms that baptism is the ancient and normative entry point to receiving Holy Communion and that our Lord Jesus Christ calls us to go into the world and baptize all peoples. We also acknowledge that in various local contexts there is the exercise of pastoral sensitivity with those who are not yet baptized.

There was some discussion about the closing sentence, and a substitute was offered referring to “occasional” exercise of pastoral sensitivity. The amendment failed. The Resolution was adopted and sent to the Bishops.

The Bishops then removed the final sentence and it came back to the Deputies, who concurred and adopted it in this form, which affirms the status quo:

Resolved, the House of Bishops concurring, that The Episcopal Church reaffirms that baptism is the ancient and normative entry point to receiving Holy Communion and that our Lord Jesus Christ calls us to go into the world and baptize all peoples.

C040 was discharged as already acted upon.

There was a lot of discussion and testimony on this resolution. Most resolutions only go to each House once, but this went back and forth, as described above.

Thank you to those many of you who have helped me keep track of this discussion.

24 thoughts on “Baptism – communion – which order?”