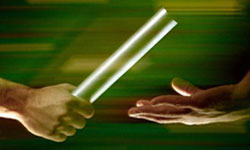 There is a tradition of “receiving the creed”.

This is the fifth post in a series on the Creed.

Those involved in a catechumenal process as adults (for example, the Roman Catholic Rite of Christian Initiation for Adults) will probably have experienced receiving the creed as part of their journey to baptism (or possibly confirmation or reception).

This, then, becomes, for these people, a more proximate “source” for them of the Apostles’ Creed.

In my book, Celebrating Eucharist, I offer a way to celebrate this:

It is appropriate that the Apostles’ (or Nicene) Creed be given to the candidates for baptism on the Third Sunday in Lent. The Apostles’ Creed is preferable as it is recited on the occasion of their baptism at the Great Vigil of Easter.

Immediately after the sermon, the candidates and their companions are called forward. The candidates may kneel or bow their heads. The companions place a hand upon the shoulder of the one they are companioning.

One of the catechists says:

Let the candidate(s) for baptism now receive the Creed from the Church.

The people and presider say the Creed standing. The presider concludes:

May God remain with you always. Amen.

The candidates and companions may be prayed for, and then return to their places, or they are dismissed.

As well as any other comments, people who have experienced this or participated in it might add their own reflection.
image source