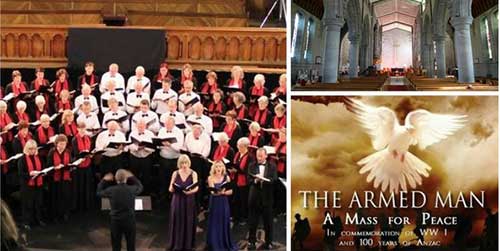 On September 11, the 14th anniversary of the terrorist attacks on the United States, my sermon included how attitudes of so many, many people began changing towards Islam, towards Muslims – a fifth of the world’s population. Later, the same day, I heard about the Nelson Anglican Cathedral not allowing a religious-tolerance concert in its building. The piece, The Armed Man, is music following the traditional framework of a Christian Eucharist. It is dedicated to victims of the Kosovo crisis.

The lyrics are here. Early in the piece, it includes the Muslim call to prayer, the Adhan.

So that we are all clear what we are talking about, here is the call to prayer, the Adhan, in the Arabic transliteration (as it appears in the concert) and the English translation. It includes phrases such as:

Ashhadu an la ilaha illa Allah
I bear witness that there is no god except the One God.

Ashadu anna Muhammadan Rasool Allah
I bear witness that Muhammad is the messenger of God.

Hayya ‘ala-s-Salah
Hurry to the prayer…

I see no issue with Christians being able to affirm the majority of the phrases of the Adhan. “Allah” is the Arabic word for “God” and is regularly used by Christians speaking in Arabic or even in Bahasa Malay or Bahasa Indonesia.

Of the statements, I can only imagine that Christians may not affirm, “I bear witness that Muhammad is the messenger of God.”

It is important to note Muslim hesitancy about having people proclaim the Adhan, particularly in a Christian place of worship. There is certainly more Christian affirmation in this concert that Muslims could struggle with.

So this concert is clearly understood not as each religion affirming absolutely everything within all the other world faiths. I will come back to that as my final point in this post. Surely, while it should be obvious to nearly all, a simple rider in the programme to that effect would be sufficient for those who do not immediately recognise this. I imagine that fluent Arabic speakers in Nelson (who actually understand the text) get this without such a disclaimer.

Nelson Cathedral performed this work in 2007, and there is a church communication response to the Nelson Cathedral decision: “The decision by the Dean should not be seen as reflecting the stance of the Diocese of Nelson, nor the wider Anglican Church in Aotearoa New Zealand.”

The Anglican Church in this land, in fact, has a positive attitude to other world faiths – formally possibly more so than many other churches internationally. As well as material of Christian origin, our NZ Prayer Book contains Buddhist, Hindu, Jewish, and Jain texts. These texts are formularies – the doctrine they express is binding on us.

Certainly, I have previously said that we need a much deeper conversation (debate?) about what we mean by “consecrating” a space for Christian worship? Church buildings are used for innumerable “non-worship” activities [not to mention the discussions we can have about what constitutes as appropriate Christian worship]. What are the edges of activities that are acceptable within a church building? What would not be acceptable? The Nelson Cathedral decision on the concert fits within this conversation. The response of the church’s communications (above) indicates this decision does not express where our church currently stands in this conversation. Cathedrals and other church buildings have been used for everything from diocesan balls, graduation ceremonies, dinners, and business meetings.

Many rent out out church buildings. Where are the edges of the activities we will allow for our financial benefit?

Ironically, in this particular debate, it is Nelson Cathedral itself that has what to me is a disconcerting rental policy.

I am concerned to see, on the Nelson Cathedral website, the sacramental ministry of celebrating a marriage as “Venue Hire”! And this is not even talking about renting out the space without cathedral clergy being involved. No, this is when “one of the cathedral clergy will be appointed to work with you as you plan and prepare for your wedding”.

To conclude this post, let us be clear what religious tolerance does not mean. It does not mean that all faiths are put into a melting pot, and all the wonderful variety of colours come out a boring greyish brown. It does not mean, for example, that we would expect a Mosque to be comfortable that Hindus come in and celebrate a Vedic sacrifice in their sacred space. It does not mean there is no robust disagreement. It is precisely being clear and strong about one’s own position, and accepting the clear, strong beliefs and practices of others.