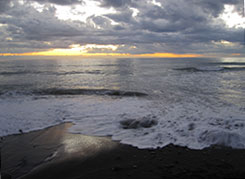 Here is another reworking of a collect shared by Roman Catholics and Episcopalians/Anglicans. I am very happy to receive comments and also suggestions for improvement. The process of producing such a reworking is always a wonderful mulling over and over and over. The mulling over is a form of lectio (prayer), just as the collect itself is the result of the church’s lectio. The process has value – even though I acknowledge the product may be able to be improved. In the commentary below there are some pointers to help your own mulling-over lectio.

Almighty and everliving God,
you govern all things in heaven and earth;
mercifully hear the prayers of your people,
and guide the course of our days in your peace,
through Jesus Christ, our Saviour
who is alive with you in the unity of the Holy Spirit,
one God now and for ever.
Amen.

ALMIGHTIE and everlasting God, whiche doest governe all thynges in heaven and earthe: mercifully heare the supplicacions of thy people, and graunt us thy peace all the dayes of our life…

The Roman Catholic Church uses it on the Second Sunday in Ordinary Time as:

Almighty ever-living God,
who govern all things,
both in heaven and on earth,
mercifully hear the pleading of your people
and bestow your peace on our times…

The Episcopal Church has it as:

Almighty and everlasting God,
you govern all things both in
heaven and on earth:
Mercifully hear the supplications of your people,
and in our time grant us your peace;
through Jesus Christ our Lord,
who lives and reigns with you and the Holy Spirit,
one God, for ever and ever. Amen.


They, however, use it two Sundays later. Having been the only one I know of who has pointed to almost half the year Episcopalians and Roman Catholics praying different translations of the same collect on the same day, I now have no explanation why, in this case, the same collect is prayed but on (slightly) different days! With Roman Catholics praying this prayer on the same day as advocated in the Book of Common Prayer tradition (in its several editions), I have no hesitancy in advocating that this be the collect to pray on the Second Sunday in Ordinary Time (The Sunday between 14 and 20 January).

Ordinary Time is a term deriving from the Latin ordinalis, an order of succession; cf. ordinal numbers – counting numbers. “Ordinary Time” is not “boring time” – it is not the opposite of “extraordinary”. In Latin, this Sunday is dominica II per annum – the second Sunday in the course of the year.

There are echoes of 1 Corinthians 15:47-49 (primus homo de terra terrenus secundus homo de caelo caelestis – “the first human, being from the earth, was earthly; the second human, from heaven, is heavenly”).

We also remember John 3:12 – this collect becomes our response to Christ’s question:
si terrena dixi vobis et non creditis quomodo si dixero vobis caelestia credetis
“If I have told you about earthly things and you do not believe, how can you believe if I tell you about heavenly things?”

God, we proclaim, governs all things in heaven and earth; and we are converted into Christ.

Do I, do you, do we believe (ie. live) that God governs a few things, many things, or all things?

After the bidding, “Let us pray”, those gathering pray in silence. The time of silence is long enough to form prayer. Then the presider collects those prayers in the collect to which the gathered community acclaims, “Amen.” Clearly, the gathering collect needs to be general enough that all can understand their prayers to be included. That is the case in this particular collect. The prayers of God’s people that we are asking God to hear are the (silent) prayers of all those individuals who are gathering, as well what is particularly sought in this collect.

guide the course of our days in your peace: pacem tuam nostris concede temporibus

This might be translated in different ways. We are praying for God’s peace in what is temporal (temporibus – in contrast to eternal), in our times, in our circumstances. It is God’s peace – not just “the world’s” peace. Some will see the desire for external peace as deriving from the time of the collect’s origin. Others will see Cranmer’s particular translation as, similarly, a yearning for external peace in the tumultuous times in which he was translating (“Give peace in our time, O Lord”). The prayer for such external peace is still as valid today as in any earlier period. The prayer for inner peace is also as important today as ever.

9 thoughts on “pray for Peace”