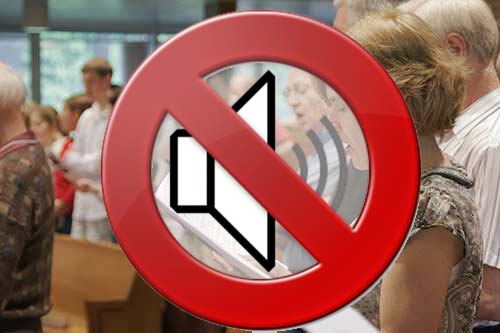 Church services have shifted from being the Body of Christ worshipping God to being primarily focused on evangelising the unchurched. With this shift, congregational prayers, affirmations, responses, and, singing were replaced with the “worship”-preaching-worship format.

The music shifted to primarily being intended to create an emotional response.

So, in summary, begins the hard-hitting post by Jonathan Aigner Why WOULD Anyone Sing in Church These Days?

But we didn’t stop there.

Our cultural ability to make music has decreased steadily since the dawn of commercial recorded music. For many years, churches were able to counteract this musical decline by training many in their congregations to sing and understand the written language of music. We had choirs for all ages. Now, most churches have given in to the cultural decline of music appreciation. Instead of training many of our own, we hire a few to stand up and perform from the stage. We once heard the tapestry of vocal timbres, ranges, and textures rising in united praise and thanksgiving for God’s mighty acts in Jesus Christ, and welcoming all to join in. Now, we hear one voice, or perhaps a small group of voices, electronically pushed toward us.

So, we’ve stopped teaching ourselves how to sing, and traded the collective voice of the congregation for a few amplified tones.

We replaced songs created for many voices with songs meant for one or a few. And instruments that used to undergird and encourage congregational singing were replaced with a band and lead singer(s)/”worship leader”.

I encourage you to read the whole post (and the discussion that follows). Sure, these are generalisations. But Jonathan echoes some of my concerns:

Yes, singing is counter cultural (increasingly so, and especially in non-singing cultures such as Pakeha Kiwis). We should see that as a plus – although I regularly get criticised that my appreciation of a difference between “church” and “world” restricts people from coming to Christ. In the majority historical Christian tradition (and in the Jewish tradition which gave birth to it), we do not sing at liturgy; the liturgy is sung.

Jonathan concludes with some ways to recover singing:

H/T Where did the music go?