On Thursday, April 4, three options were unveiled for the quake-damaged cathedral in the centre of Christchurch. These are termed 1) Restore; 2) Traditional; 3) Contemporary. They are the result of conversations and an international Study Tour.

While the look of the three is different, essentially only one liturgical option is being offered.

More than a year ago, it was said of option 1, bringing the whole thing down and putting the whole thing up again, that “No-one wants that.” It is a sign of humble listening that that option is now on the table for discussion. [Currently in the online Press poll it is running at about 30%]

Option 2 has echoes of a wooden option Sir Miles Warren unveiled in March. Sir Miles’ building is estimated at $18million (excluding deconstruction). The cathedral, of course, had originally been intended to be wood, and Sir Miles took his inspiration from that. Option 2 appears to have taken these ideas in some different directions. And also ended up with different costings.

Option 3 is the contemporary designed produced by the committee. The committee gives it as the cheapest, and probably quickest to put up.

Beyond these three options there are some who see the cathedral, as it currently stands, as repairable and able to be appropriately strengthened without the need to deconstruct it. Others think there could have been a wider, possibly international competition, with the committee (with its experience and study) being the judges.

The cathedral, prior to the quakes and as given in Option 1 (restore), is not completed according to the intended original design. The east end is one bay shorter than that early plan, and the east end was so constructed that it could have that extra bay added at a later stage. It is of interest that none of the options picks up on completing the cathedral to what was intended in that original design.

The committee provides us with three floorplans: Option 1; Option 2; Option 3. The committee has only fully developed the plans for Option 3.

What is of liturgical interest is that each of these floorplans is, at the heart, identical. The committee calls this “renewed ancient vision”. This means, for example, that some in the north transept (or in the south transept) can not see a baptism at the font in any of the three options. The liturgical life celebrated in each of the three options is essentially identical.

The seating is cinema style, with long distances for many in what may encourage more a feeling of observing rather than participating. People can be up to 53 meters away from the font, for example (and, as already noted, around a corner).

From the perspective of planning from the inside out, what is offered is essentially the 19th century plan, with three different “shells” to keep the rain off us. As if to underscore this nineteenth century model, all the images provided by the committee show greying and balding male clergy and all-male leadership.

Only option 1 provides for an adjoining building, which includes toilet facilities. I cannot imagine any contemporary church complex which would intentionally separate its hospitality/fellowship and toilet facilities from its worship space. Inherited separate buildings are a constant issue for worshipping communities. In Option 3 a person inside the church may need to walk about 50 meters (through rain?) to get to a toilet outside.

The location of the font is not central, and in Option 2 appears to be separated from the nave by a wall. Are we foreseeing the ignoring of the font on occasions, and the use of an alternative, portable font “up the front”? Anglicans are well known for, in the worship space, collecting altars, fonts, chairs, etc. that are rarely if ever used. This may be understandable in an inherited building but not in a new one.

If baptism is by immersion or submersion, where is the nearest place to dry and change?

What provision is there for projecting onto screens? Many occasions are enhanced by projected images, and some demand them.

What is the children’s chapel? In option 2 it is a building 27 meters long.
Where is the cathedra (the bishop’s chair)? The cathedral takes its role from this feature.

How will this space be used for non-liturgical events? The cathedral in the square was used for lectures, inter-faith events, rented out, the diocesan ball was held in it, concerts,…

How many things, in the committee’s presentation, are placeholders? Has, for example, the 14.5m high bronze image of the Madonna and Child in Option 3, already been commissioned? Or is it (more probably) indicative of what might go on this 16.5m wall? If that is indicative, what else is indicative? Where does indicative stop and set-in-concrete start?

This post is in response to the invitation from the committee requesting feedback. There will be conversation about the cathedral at the diocesan synod meeting this Friday and Saturday (the primary focus of the synod is diocesan strategic planning).

It is my intention to rework the liturgical ideas from this post for that feedback after any conversation that may develop in the comments here. Public consultation concludes on May 3. I am not sure of the process and time frame after that.

I am particularly aware that the heat to light ratio has been rather high on the Christchurch cathedral’s fate. If you want to add heat – there are plenty of other places that welcome your comments; but not here. No anonymous comments, and the usual customs that apply to this community. But, yes, your reflections are certainly most welcome here – as always. And I encourage you to comment and participate. 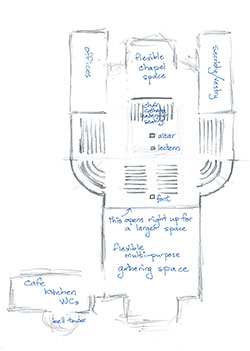 You will have noticed that there are slight variations to the floor plan between options (adding or removing curves, etc). My quick sketch on the left (you can click it to enlarge it) is in response to discussions so far. It is a tweak of the floorplan by adding in two quarter circles, radius approximately 8m.

One enters into a 20-25m square multi-purpose, flexible gathering space with adjoining kitchen and WC facilities. [Note the suggestion that this have two levels]. The division to the main worship space can be opened right up to allow even greater numbers in the worship space for occasions that require it.

You move past the font into the main worship space. The font is visible from all seats. It is no more than 25m from anyone. Similarly, no person is further than about 14m from the altar.

There is no need for a pulpit. There is a top-quality sound system.

The cathedra, clergy, and leadership seating is with the choir.

The congregation is gathered around Word and Sacrament in a semicircle.

The cruciform sense is remembered. But in current options, few will sit in the transepts. In this configuration, people will flow naturally through the quarter circles into the transepts.

There is a flexible chapel space in the east.

Further update 11 April: the good suggestion worth considering of having the choir more facing the congregation – completing the being in the round effect.