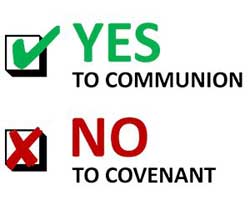 Whatever now happens, there is no way that anyone can say that the “Anglican Covenant” is regarded in the CofE as some sort of consensus document. Even if the necessary majority is now found, and the CofE General Synod passes the “Anglican Covenant” as a leaving present for Archbishop Rowan, the document clearly does not have the clout that its backers must realise that it needs.

Although the “Anglican Covenant” has never been clear – its drafters obviously never foresaw or even considered what would happen if the CofE did not sign up. What could it possibly mean to have a “Covenanted Anglican Communion” of which the Archbishop of Canterbury is not a member?!!!

One should not have been surprised. Arguments against the “Anglican Covenant” often follow a careful, step-by step analysis through the actual text. Recent critique has highlighted that even the assumptions within sections 1-3 do not reflect the reality that these assert to objectively portray. When we get to section 4, it has been said well that

In essence, the Standing Committee receives a question, receives assistance from unspecified “committees or commissions” mandated by unspecified authority, takes advice from any body or anybody it deems appropriate and decides whether to refer the question to the Anglican Consultative Council and the Primates’ Meeting. The Standing Committee then decides whether to request a Church to “defer” a decision or action and what relational consequences should result if it does not. It  then moves on to a determination of whether or not a Church’s action or decision is or would be “incompatible with the Covenant.” The Standing Committee does this “on the basis of advice received from the Anglican Consultative Council and the Primates’ Meeting,” not on the basis of a process or procedure in which the Church whose action is in question participates in any way, other than to the extent it has representatives on the ACC (from which it could already be barred) and a primate at the Primates’ Meeting (from which its primate could have been excluded). …

Agreeing to an undefined, unspecified process in which the decision-making bodies have full discretion to act in any manner they deem best–not only as to the process but as to the standard and burden of proof, information considered, and all other aspects of the dispute resolution system–is what the covenant contemplates. In the words of the rule of law, there is no procedural due process and no substantive due process guaranteed by the covenant. The outcome is to be trusted and respected based on the persons/bodies making the decisions rather than a system based on how the decision is made.

In contrast, arguments in favour of the “Covenant” have tended to not quote from the actual text, and at best have been of the form:

At worst the arguments in favour of the “Covenant” have painted those critiquing it with approaches verging on the ad hominem, denouncing their scholarly ability, or being unbiblical, and being allied with Satan.

The motion about the “Anglican Covenant” to be debated in my own diocesan synod (Christchurch, New Zealand, April 21) is:

That this Synod,
1. Affirms the Covenant in principle;
2. Supports Parts 1 to 3;
3. Supports in principle the adoption of Part 4.

The motion was forwarded to us without the name of its mover or seconder.