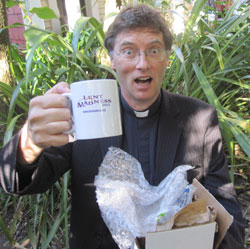 There are some who are happily kept under the illusion that people blog for the love of others and as a calling… The reality is actually quite different! Yes, there is considerable expenditure of time, energy, and money. But the rewards (as with so much for Christians) are out of this world! In my case I am now being internationally recognised as a “celebrity blogger” in Lent Madness, the movement that brings a bit of fun with your fasting. And I get to have a mug for that.

32 saints were placed into a tournament-like single elimination bracket. People voted for their favourite saint. 16 saints make it to the Round of the Saintly Sixteen (the current round); eight advance to the Round of the Elite Eight; four make it to the Final Four; two to the Championship; and the winner is awarded the coveted Golden Halo. The first round consisted of basic biographical information about each of the 32 saints. Things get a bit more interesting in the subsequent rounds as we offer quotes and quirks, explore legends, and even move into the area of saintly kitsch.

The photo is of the mug that is there for Lent Madness! I mean the one on the left. I mean your left – my right. Oh… never mind! It just arrived this weekend. The mug. No – not me! I’ve been here all along.

4 thoughts on “Mug for Lent Madness!”