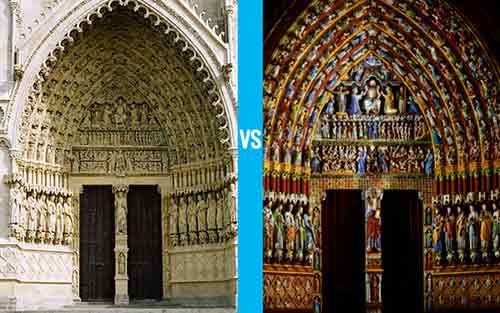 In cleaning the Cathedral Basilica of Our Lady of Amiens in France, workers discovered traces of paint on the 13th century exterior. They realised that the western façade of the cathedral was originally painted in multiple colours.

Having determined the exact colours as they would have originally been, elaborate lighting techniques were developed to project these colours onto façade.

We often forget how Victorian churches looked, with their fine lines of stunning colour, often covered later by a monotonous single colour (reinforced by black-and-white photos). But this is even more the case with Medieval churches – reinforced by the popular term: “The Dark Ages”.

[Update: a response to this post on twitter reminded how many Greek and Roman statues were painted, and not marble-white.]

Please look past the gendered language of the following: