Friend and fellow-blogger, Peter Carrell, said something strongly recently which has kept me thinking since he wrote it on his website:

It matters not one whit how much nerve I (or you) have, nor whether we believe there is only One Bread etc, nor whether various popes make pleasant and, yes, encouraging gestures, the simple ecumenical fact of the matter is that neither of us is welcome to preside at a Roman Mass. And, to keep perspective, neither yet is a Methodist Presbyter welcome to preside at an Anglican eucharist.

We have a lot of ecumenical ground to cover before that great day when all sectarian divides will be overcome in heaven!

To borrow profound words about relationships from facebook: “It’s complicated”.

[I will, probably next week, write about this point in relation to the Anglican Communion, but in today’s post I will, accepting Peter’s evident point, dig a little deeper to some other underlying issues.]

The NZ Anglican General Synod Te Hinota Whanui decided that clergy from the Negotiating Churches (Presbyterian, Methodist, Church of Christ, Congregational) could be invited to preside at the Eucharist at the altar in Anglican church buildings, wearing vesture normal for Anglican clergy, and using rites authorised for Anglicans.

Our doctrine commission, however, determined that, when this happens, what is happening is not an “Anglican Eucharist”.

When this decision was conveyed to our diocesan synod, I asked a formal question whether those (non-Anglican) clergy and/or the service participants would be told of this doctrine commission determination. The formal response was “it depends” (read, “no”); the jokes that followed tended to confirm the-best-Anglican-response-to-issues-is-not-honesty-but-fudging-mumbling.

I wonder, however: Is there actually such a thing as an ‘Anglican Eucharist‘? (cf my starting quote for this post). I am going to posit, “No”. There is just “Eucharist“.

There is an image that worked better when we all faced East (with the priest with his back to the congregation): we could imagine the altar table bursting through the East wall of the church building, with century after century of people, all around the world, gathering around one eucharistic table back to Jesus. But I think I still want to hold to the point of the image: when we celebrate Eucharist, we are all gathered around the single table, “with all who stand in earth and heaven”. 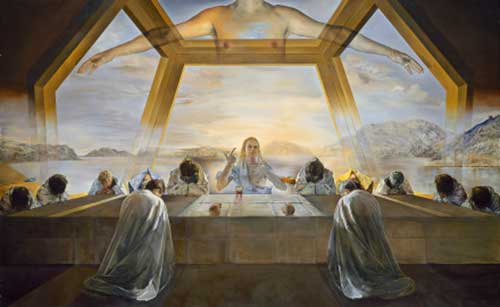 Validity is one dimension of this one Eucharist (hence the requirement that bishops not tinker with ordination). Another dimension is efficacy. [For more on this read Licit Valid Efficacious Sacraments]

Roman Catholic or Eastern Orthodox eucharists are seldom questioned for validity; a home communion led by an unordained person may not satisfy traditional requirements for validity. But the perfunctory going through the motions in the former may leave no one transformed, while in the latter it may result in deep engagement with the poor and oppressed – a deeper living out of Jesus’ life. The latter (“invalid”) may be closer to the one Eucharist than the former (“valid”).

What do you think? Is there one eucharist to which we approximate to a great or lesser extent? Or are there other ways to look at this?

19 thoughts on “One Eucharist?”