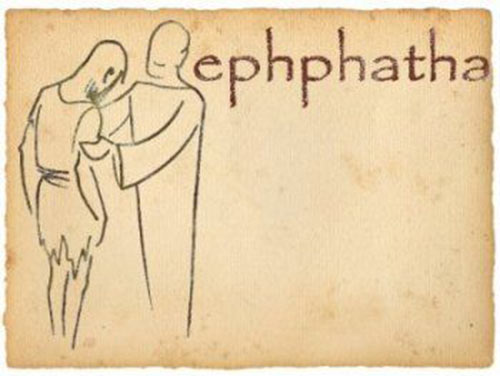 They brought to Jesus a deaf man who had an impediment in his speech; and they begged him to lay his hand on him. He took him aside in private, away from the crowd, and put his fingers into his ears, and he spat and touched his tongue. Then looking up to heaven, he sighed and said to him, “Ephphatha,” that is, “Be opened.” And immediately his ears were opened, his tongue was released, and he spoke plainly. Mark 7:32-35

In lectio, praying that we may be open to hear and speak is a wonderful connection with this reading.

Six years ago, when we were all reading the Ephphatha Gospel passage (above), Pope Benedict XVI, in his Sunday Angelus address, said that if you were going to summarise the mission of Jesus Christ in one word, Ephphatha could be that word.

The earliest record of it used in a prebaptismal ceremony is in the Gelasian Sacramentary (C7) on Holy Saturday (#42). It takes place after an exorcism and before anointing with the oil of exorcism and the renunciations of Satan. The rubric for the bishop can be translated as: “Then you touch [the catechumen’s] nostrils and ears with spittle and say into their ear: ‘Ephphetha, this is be opened, to a sweet aroma. But you, devil, flee, for the judgment of God has come near.’”

After Vatican II, this rite was moved for children to after baptism (read further here – off site). Hence, there is now a continuation in sacramental practice. In baptism there is the tradition of the

Ephphetha or Prayer over Ears and Mouth

If the conference of bishops decides to preserve the practice, the rite of Ephphetha follows. The celebrant touches the ears and mouth of the child with his thumb, saying:

The Lord Jesus made the deaf hear and the dumb speak. May he soon touch your ears to receive his word, and your mouth to proclaim his faith, to the praise and glory of God the Father.

In Australia and New Zealand, that is simply part of the rite. In the United States it may be performed at the discretion of the one baptising.

It can be part of the catechumenal process (RCIA) on Holy Saturday (read more, off site).