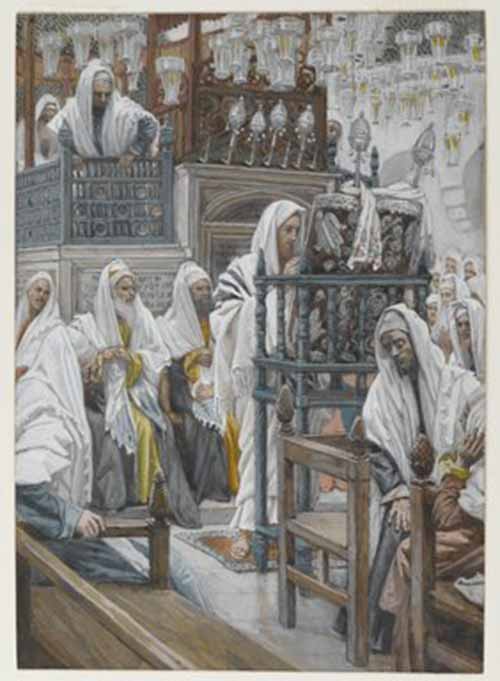 This post continues the reflection: Did the Jewish People have Liturgy?.

If you go to a synagogue service nowadays, you will experience prayers, a reading from the Torah (Genesis to Deuteronomy), a reading from the Prophets (referred to as a Haftarah), and a sermon. The Torah portion and Haftarah portion are set according to a lectionary. Some follow a one-year cycle, some a three-year cycle. In the three-year cycle, Genesis through Deuteronomy is still read every year, but only a third of the lesson is read each week.

What we see in the synagogue service is the basic outline of “the first half” of the Christian Eucharist.

A lot of the detailed history of the development of Jewish liturgy is disputed. Nonetheless, this essential structure of the synagogue service, the basic outline, can be reliably understood to go back to the time of Jesus and earlier.

Click to download the Torah and Haftarah readings as presented in Reading of the Bible in the Ancient Synagogue by Charles Perrot.

To illustrate the point, we can read the story uniquely told in Luke:

When [Jesus] came to Nazareth, where he had been brought up, he went to the synagogue on the sabbath day, as was his custom. He stood up to read, and the scroll of the prophet Isaiah was given to him. He unrolled the scroll and found the place where it was written (Luke 4:16-17)

“as was his custom” refers back to the verse preceding this:

He began to teach in their synagogues and was praised by everyone. (Luke 4:15)

The historians’ debate about whether Nazareth had a synagogue building (and could afford its own scroll of Isaiah) is beyond the scope of this post.

The Torah portion has been read, and Jesus now reads the haftara from the prophets (Nevi’im). The text Jesus reads is not in the current lists of haftarot. He “found the place” (εὗρεν τὸν τόπον) can be interpreted to mean that Jesus chose the particular haftara. This could have been the practice, that the speaker chose a passage from the prophets that complemented the Torah portion and led into his address. Or he “found the place” can mean that the haftarot portion was already fixed, and Luke is simply describing Jesus finding the marked point in the scroll before proceeding to read it. That the haftara reading was fixed in a lectionary (in the same manner as the Torah portion was) is the stronger possibility. There is no suggestion that Jesus asked for the Isaiah scroll – it is the one that is “given to him”.

Some asides are worthwhile before reiterating the primary point of this post.

‘The Spirit of the Lord is upon me,
because he has anointed me
to bring good news to the poor.
He has sent me to proclaim release to the captives
and recovery of sight to the blind,
to let the oppressed go free,
to proclaim the year of the Lord’s favour.’ (Luke 4:18-19)

This is not quoting the Hebrew text (the Hebrew, for example, makes no mention of “recovery of sight to the blind”):

The spirit of the Lord God is upon me,
because the Lord has anointed me;
he has sent me to bring good news to the oppressed,
to bind up the broken-hearted,
to proclaim liberty to the captives,
and release to the prisoners;
to proclaim the year of the Lord’s favour,
and the day of vengeance of our God;
to comfort all who mourn; (Isaiah 61:1-2)

One also notes: the text cuts off before proclaiming “the day of vengeance of our God”.

The Septuagint does mention recovery of sight to the blind, but Luke’s account also does not accurately replicate the Greek Septuagint text:

The Spirit of the Lord is upon me, because he has anointed me; he has sent me to preach glad tidings to the poor, to heal the broken in heart, to proclaim liberty to the captives, and recovery of sight to the blind; to declare the acceptable year of the Lord, and the day of recompence; to comfort all that mourn

These asides bear on recent energetic discussions on this site in relation to the reliability of every part of the Bible.

One also notes the irony in releasing the captives when John the Baptiser is reported to be in prison (Luke 3:19-20 – a description, in Luke, that is presented prior to the account of Jesus’ baptism!)

Some conjecture that the Torah portion enjoined the Jubilee Year, and from that date this event.

A final aside is to warn against turning the rejection of Jesus in Nazareth (Luke 4:28-30) into a disagreement of Jesus’ intimating a widening to the Gentiles. The rejection is in response to Jesus’ not doing in his hometown what they had heard he had done in Capernaum (Luke 4:23).

Let’s return to the primary point of this post, which follows discussions instigated by the question, “Did the Jewish People have Liturgy?” The story in Luke 4 illustrates and takes for granted Jewish liturgy at the time of Jesus, and the followers of Jesus continued the basic grammar of that liturgy and continue to do so today. The offices (including Matins and Evensong) and “the first part of the Eucharist” (The Ministry of Word and Prayer) follow the pattern of: systematic, lectionary-sourced readings from the scriptures, address, and prayers.

6 thoughts on “Jesus in the Synagogue”