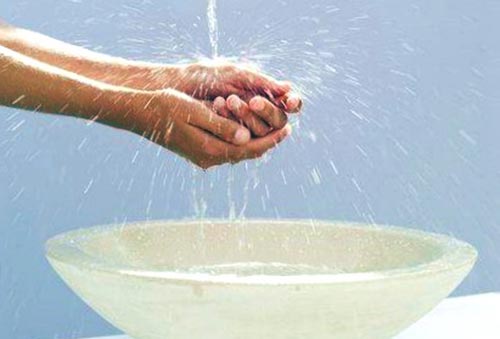 The Abrahamic faiths (Judaism, Christianity, Islam) all have a tradition of ritual handwashing before prayer.

In the third century there are traces of a custom of washing the hands as a preparation for prayer on the part of all Christians; and from the fourth century onwards it appears to have been usual for the ministers at the Communion Service ceremonially to wash their hands before the more solemn part of the service as a symbol of inward purity.

So, Christians did it generally, and clergy continued the practice… but wait until the next post in this series… there may be more going on than we realise…

It was the tradition for Christians to wash before entering the church for worship. This usage is also legislated in the Rule of St. Benedict, as a result of which, many medieval monasteries were built with communal lavers for the monks or nuns to wash up before the Daily Office.

In the Form of Service for Sundays in the fourth century Apostolic Constitutions VIII 11:

Let one of the sub-deacons bring water to wash the hands of the priests, which is a symbol of the purity of those souls that are devoted to God.