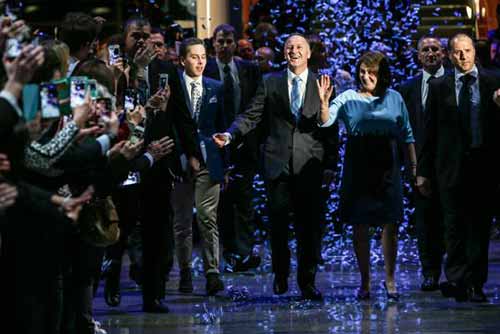 Much of New Zealand’s election on Saturday, and discussions around it, forms parables for the church.

First the difference: anyone can examine detailed political statistics, drill down, and analyse them. But, although NZ Anglicanism keeps some localised statistics (diocese by diocese), it insists on keeping no national statistics.

Saturday’s NZ election result was a surprise. In spite of Dirty Politics

, Dotcom’s ‘Moment of Truth‘, even the resignation of a minister, John Key and National have returned with an even larger majority, now with 48 per cent of the vote and, hence, able to govern alone should they so wish. Labour only received about half this percentage.

Soul-searching in response to the decimation of the vote for Labour and the Left has already begun. Clearly an approach that says, “the voters are wrong”, is no solution. There is a cultural issue on the Left; this may involve a change of leadership, but changing the leadership will not be sufficient to change the culture. Financially, the Left is now also broke. This was alluded to in David Cunliffe’s speech on Saturday night.

One very important point is that whenever people describe their perspectives, their hopes, when they answer questions, for example, on the online voting tool Vote Compass, then the majority indicated the policies they prefer are more those of Labour. Yet this is not the party they voted for. There is a disconnect between what the party centrally affirms that it stands for, and what people generally see the party as standing for.

The party needs to communicate its message better; it needs to be refreshed; it needs more funds.

I’d be surprised if you haven’t picked up the parable. But, I’ll unpack what some of it means…

Pretty much any church statistics we do have are trending downwards: numbers attending, numbers of stipended clergy, numbers of baptisms, sizes of church buildings (current and planned; current buildings are made to look fuller by removing pews), numbers of parishes (two decades ago I would have put a church community with a stipended priest for every 10,000 population – I don’t know what church strategists would do now, do they plan one for every 20,000?).

Failing to communicate our message

We say we are about sharing the good news, nurturing believers, loving service to those in need, transforming injustice and pursuing peace, and caring for and renewing creation. Ordinary, non-church people would probably tick a good four or five of those “five marks” of our church mission statement. That’s what they probably want to put real energy into. That’s probably what they would love to be part of supporting, and having people support them in. But how many people in the church would even be able to articulate those five marks clearly? And instead there is a disconnect between what the church centrally affirms that it stands for, and what people generally see the church as standing for.

People see us as

In my experience non-churchgoing people are intensely interested in spirituality, often have a deep spirituality themselves (maybe more than many churchgoing people), are caring about people and the environment (again, often more than many churchgoing people), love grappling intelligently with issues of meaning, love, justice, suffering, and so on – but just do not have any sense that church is a place to do this, and that church would aid and support them in their interests… Clearly an approach that says, “the non-churchgoers are wrong”, is no solution.

Needing to be refreshed

One statistic that has resounded for me was the recent announcement that the average age of curates now is over 50 years old. Two decades ago, I warrant, it was two decades younger. The shift to hazy pathways to ordination has generally failed to attract younger postulants for ordination and leadership, in a world that continues to provide clear pathways to other lifelong vocations and careers. The youth are not as averse to sacrifice and discipline as the older, who lower expectations, may presume.

This needs little unpacking. Even to continue the cut-back activities still remaining, demands funds beyond our imagining to find.

Christian communities and denominations fail to be seen as working together

Statistics corroborate the sense that Christian communities and denominations are fighting over the shrinking remnant still willing to attend church. Disagreement and difference is what is seen. Even within denominations, subgroups are identified with evermore dividing adjectives.

As with the election, so with the church: my thoughts of what some of the problems and possible solutions are may be way off the mark, you may have a much better idea, but this is a time to be open to each other’s thoughts, not threatened by them and shutting and shouting each other down.

So do add your thoughts here.

26 thoughts on “Learning From The Election”