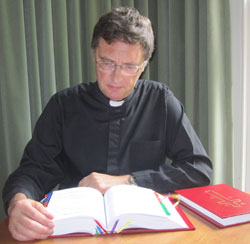 For those not (fully) up to speed on this, let’s just recap:

Liturgiam authenticam was promulgated by the Vatican in 2001. It had a very strict word-for-word translation rule and resulted in an English-language translation of the Roman Missal from Latin into English as it is not used, the loss of ecumenically-agreed texts, and hence our shared musical tradition. There have, of course, been positives too. The new translation did, for example, help my discovery that Anglicans (Episcopalians) and Roman Catholics share the same collect collection. And that we often pray these on the same day (a practice no one has yet provided a history or explanation of)!

In September, Pope Francis issued a motu proprio, Magnum Principium (The Great Principle). This changes Canon 838 on translating liturgy into the vernacular.

Until this change, bishops’ conferences would make suggestions to the Vatican, but it was the Vatican that made all the ultimate calls and changes to the English translation. That, of course, was not the teaching of Vatican II which gave far more weight to the local bishops. Pope Francis has now reformed the process, handing back the responsibility to the bishops in accordance with this Vatican II vision.

In a most helpful document in which Pope Francis corrects Cardinal Sarah on translation, and thereby expands the understanding of the Pope’s motu proprio, Pope Francis has three dimensions rightly involved in translation. The Pope sees

a threefold fidelity: in primis, to the original text;
then to the particular language in which it is translated,
and finally to the comprehension of the text by the recipients.

The new translation of the Mass is six years old. Notwithstanding the introduction of some evocative language, its clunky sentence construction and often awkward vocabulary have tested us all.

Liturgiam authenticam in fact unfolded as a hindrance not a facilitation of Benedict’s intentions. The 2010 English translation of the Mass burdened rather than enhanced the beauty of the English language’s concise syntax, by imposing a Latin sentence structure. … A good translation is one whereby the reader assumes the text is the original.

Pope Francis has pushed the pendulum back from the more recent Roman Catholic tendency for increased international centralisation (a tendency also evident recently within the Anglican Communion) towards the appropriateness of the principle of subsidiarity.

New Zealand’s Roman Catholic bishops make an important statement and bold promise (are there other English-language Episcopal Conferences so striking?):

Like many priests and parishioners, we share in the frustration concerning some aspects of the current translation of the Roman Missal and we reiterate our desire for beauty, comprehensibility and participation in and through the sacred liturgy.

We will be working in collaboration with English speaking Bishops’ Conferences around the world, as we seek to explore prudently and patiently the possibility of an alternative translation of the Roman Missal and the review of other liturgical texts.

Encouraged by New Zealand’s Roman Catholic bishops, I will share my own bold vision:

That Anglicans and Roman Catholics (and others interested) work together to produce English language translations that can, as much as possible, be used by anyone in those denominations.

I think it is unclear whether there would be a new English translation that would be the same across the whole English-speaking world. I wonder if other English speaking Bishops’ Conferences and the corresponding local Anglican province might join such a new and exciting ecumenical venture.