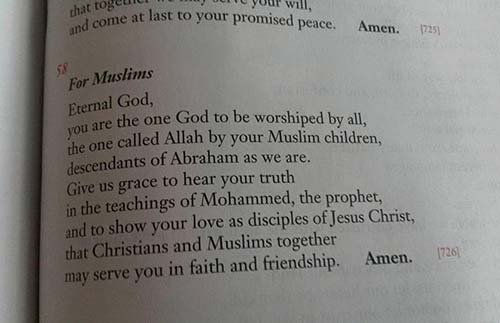 We are drawing near to that time of year again (Good Friday) which traditionally has Christians praying for the (conversion of the) Jews.

If you think that Pope Francis is radical in some of what he does in the liturgy, picture this: Pope John XXIII, at the first Good Friday service (one of the most sacred in the year) after being elected pope, interrupted the person leading the prayers. That person had just prayed the traditional prayer for the conversion of the “faithless/perfidious Jews” (“…Oremus et pro perfidis Judaeis…qui etiam Judaicam perfidìam a tua misericordia…”) The Pope stopped the ceremony and asked that the prayer be repeated without the word “perfidis/perfidìam”. The word was removed from the liturgy of the whole church by the next year’s Good Friday. The Pope said, “We are conscious today that many centuries of blindness have cloaked our eyes (about Jews)… Forgive us for the curse we falsely attached to their name as Jews.”*

After Vatican II, the prayer was revised to:

Let us pray for the Jewish people, the first to hear the word of God, that they may continue to grow in the love of his name and in faithfulness to his covenant.

Almighty and eternal God, long ago you gave your promise to Abraham and his posterity. Listen to your Church as we pray that the people you first made your own may arrive at the fullness of redemption. We ask this through Christ our Lord. Amen.

With Pope Benedict XVI, in 2007, allowing the 1962 missal as an “extraordinary form”, an older prayer for the Jews returned to usage. In 2008, the prayer in the “Extraordinary Form” became:

Let us also pray for the Jews: That our God and Lord may illuminate their hearts, that they acknowledge Jesus Christ is the Savior of all men.

Almighty and eternal God, who want that all men be saved and come to the recognition of the truth, propitiously grant that even as the fullness of the peoples enters Thy Church, all Israel be saved. Through Christ Our Lord. Amen.

The current prayer in the “Ordinary Form” is:

Let us pray also for the Jewish people, to whom the Lord our God spoke first, that he may grant them to advance in love of his name and in faithfulness to his covenant.

Almighty ever-living God, who bestowed your promises on Abraham and his descendants, hear graciously the prayers of your Church, that the people you first made your own may attain the fullness of redemption. Through Christ our Lord. Amen.

The other Abrahamic faith, of course, is Islam. The image above is from the Book of Common Worship

Eternal God, you are the one God to be worshiped by all,
the one called Allah by your Muslim children,
descendants of Abraham as we are.
Give us grace to hear your truth
in the teachings of Mohammed, the prophet,
and to show your love as disciples of Jesus Christ,
that Christians and Muslims together
may serve you in faith and friendship. Amen


The Book of Common Worship is online here.

As usual, comments are to be respectful, with your ordinary name, generating light rather than heat.

*I’ve read various versions of this story – including that on Good Friday of 1963, the old text was given to the deacon who read “perfidis” in the prayer for the Jews and Pope John XXIII stopped the service, and asked that the prayer be repeated with the word omitted. It is possible, of course, that the stopping-the-Good-Friday-liturgy event happened twice.

2 thoughts on “Praying for Jews and Muslims”