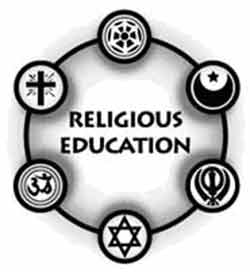 Antitheists are getting restless again. It’s back to an oldie but a goodie: trying to prevent religious and values education happening on NZ State School property (eg. here and here).

Don’t expect any consistency from them (of course). It’s not like they want to prevent students singing hymns to God! With both New Zealand’s national anthems being prayers to God, you could imagine the backlash against antitheism if they were consistent.

Not to mention the increasingly popular karakia (prayer in Te Reo Maori, not understood by the majority of white people). Nor banning marae visits where Maori, not buying into white people’s dualism, integrate religion, prayer, values, and spirituality into all that happens there.

A survey by the Secular Education Network turned up that nearly a tenth of state-funded primary and intermediate schools in New Zealand are not teaching evolution in their classes. Appalling as this may be, it misunderstands curriculum developments in NZ.

The NZ curriculum regularly eschews specific content. One school may choose to teach the European Middle Ages at Year 7, another at Year 8, a third not at all. If you move schools, you can encounter in your new school, a year later, the same material as you did last year in your old school. Or you might miss it altogether.

Content is no longer king. Who are you, the reasoning would go in our post-modern context, to decide that European Middle Ages are more important to know about than the same period in China? In our Information Age, for content there is Google. There is no requirement in our NZ Curriculum to examine students for their knowledge of evolution.

It is important to be clear:

Evangelisation is the term used to denote the spreading of the Good News of Jesus Christ by word or witness. Someone using an evangelisation approach would be seeking to bring about conversion.

Catechesis is the term used to denote deepening the faith of believers. Someone using a catechetical approach would be seeking to bring about movement towards maturity in faith.

It is this third approach, Religious Education, that I think is essential to any well-rounded education, and its neglect in schools is at the detriment of our present and future. Learning about and learning from the world’s great religious traditions is essential in our increasingly complex context. Introduction to Philosophy should also be compulsory. Introduction to differing ethical theories should be compulsory.

I know – I am suggesting that the Curriculum needs to have some more content.

8 thoughts on “Religious Studies in Schools?”