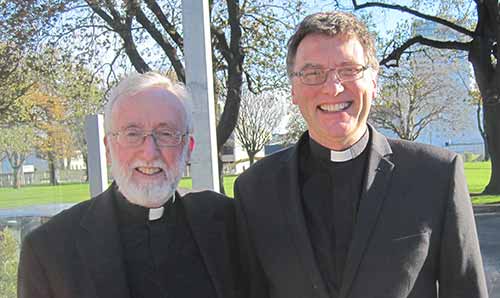 I was delighted to hear The Very Rev. Richard Giles (left, image above) preach, and generously be invited to have lunch with him. Several of his books are on my shelves:

Re-Pitching the Tent: Re-Ordering the Church Building for Worship and Mission

is the one I would recommend most. It is about how to re-order inherited worship space and also create appropriate worship space when starting afresh. That has been an important thread here, with clear relevance to Christchurch where I live. I am delighted that he has been invited to address the diocesan Clergy Conference.

Creating Uncommon Worship: Transforming the Liturgy of the Eucharist

and Time and Seasons: Creating Transformative Worship throughout the Year

are two other books of his that I have found of value.

Richard is a Visiting Fellow of St John’s College, Durham.

From 1999 to 2008 he was Dean of Philadelphia Cathedral in the Diocese of Pennsylvania, USA, where he oversaw the radical renovation of the cathedral to become a place of transformative worship, adventurous faith, and unconditional hospitality.

I am obviously not going to report our conversation, but one point is worth underlining: the experience of people nodding, verbally being enthusiastic, agreeing with (challenging, creative, helpful, new) points being made… and then returning to continue exactly as previously.

How do we help people to change and live out the truths and insights that they verbally agree with?…

There was a new priest appointed as vicar of a parish. He was famous for his preaching, and those responsible for his appointment were thrilled with having been part of getting him to agree to come. They were very excited about his first service and sermon. And he did not fail to live up to their expectations. At the end of the service, not only was everyone humming about the new preacher, congratulating him on the wonderful sermon (so full of powerful challenges), but those responsible for the appointment were also feted with praise. The next Sunday all were waiting with baited breath for the next wonderful sermon. But the new vicar repeated exactly the same sermon as the previous Sunday. There was some murmuring – a mixture of “well it is a great sermon” and “he must have made a mistake”… The following Sunday, again all were waiting for a new powerful sermon. But, yet again, it was the first sermon all over again, exactly as before. You can imagine the confusion, the consternation. Those responsible for his appointment agreed they would approach him together: “We are terribly excited about your appointment, and we do think it is a wonderful sermon, but our community has heard it three times now and are looking forward to a different sermon.” The new vicar replied, “I have seen no one yet attempting to put into practice what I said. As soon as people start acting on this sermon, then I’ll preach a different one.”