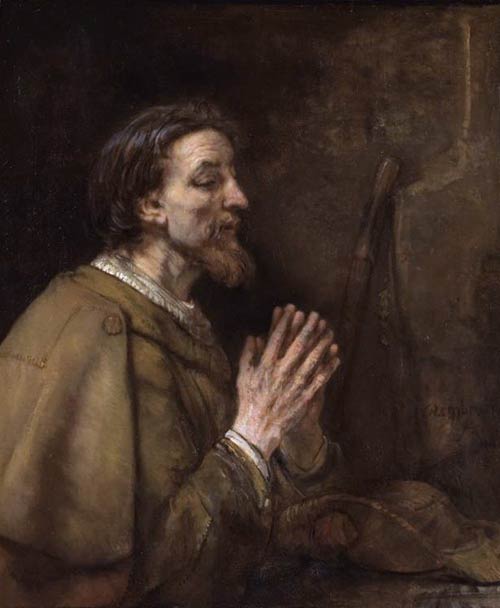 Today is the Feast Day of Saint James the Great.

At that time prophets came down from Jerusalem to Antioch. One of them named Agabus stood up and predicted by the Spirit that there would be a severe famine over all the world; and this took place during the reign of Claudius. The disciples determined that according to their ability, each would send relief to the believers living in Judea; this they did, sending it to the elders by Barnabas and Saul.

About that time King Herod laid violent hands upon some who belonged to the church. He had James, the brother of John, killed with the sword. After he saw that it pleased the Jews, he proceeded to arrest Peter also. (This was during the festival of Unleavened Bread.)

Some brief notes about this.

James is called “the Great” to distinguish him from other James – there’s lots. He was an apostle (brother of John) – both sons of Zebedee. There’s another apostle James, son of Alphaeus. And another James the brother of Jesus (James the Just) took over running the growing community when Jesus (his brother) died.

In any case, James is Jacob. Just as Jesus is Joshua.

And this suggests why James is such a popular name. The family tree goes: Abraham – Isaac – Jacob whose name was changed to Israel. So, a pretty important name in the Bible.

Herod the Great then sent Aristobulus’ son (today’s reading’s Herod, then aged about 4) to be educated in the imperial court in Rome. And he came back as the last King of Judea in 41 AD.

“Jews” in the text, of course, is a mistranslation of Ἰουδαῖος. This is “Judeans”. The last King of the Judeans saw that executing James pleased his constituency – the Judeans.

James, then, was the first of the apostles to die for his faith in Jesus. All the apostles afre martyrs, except James’ brother John. James’s body, legend has it, ended up in Spain and became the focus of pilgrimage to this day. That pilgrimage is called The Camino, Spanish for (“Way”).

Click on the link to read more about my walking the Camino.

image source: Saint James the Elder by Rembrandt He is depicted clothed as a pilgrim; note the scallop shell on his shoulder and his staff and pilgrim’s hat beside him.