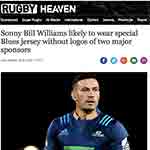 Famous Kiwi Rugby player, Sonny Bill Williams, has daily been in the news and opinion pieces because, as a convert to Islam, he taped over the bank sponsor’s logo on his rugby jersey. NZ Rugby has had a conscientious objection clause in its contract for 10 years, and, as the controversy developed, they and BNZ said they had no issue with SBW wearing a jersey that didn’t promote banks or alcohol.

Our Prime Minister’s comments illustrate many of the general public’s reactions. Prime Minister Bill English said, “It is hard to understand that one guy has to behave differently than the rest. I don’t understand all these professional contracts, but if you’re in the team, you’re in the team. You wear the team jersey.” This from a Roman Catholic Prime Minister who, more than many others, should understand acting according to faith-inspired conscience, and himself voted against the Civil Union Bill in 2004 as well as Marriage Equality in 2013 and says he makes his decisions based on his faith. Thats leaving aside what’s not to understand in the professional contract?

Understanding world religions, and the place that religion plays in the lives of the majority of humanity, should be integral to any well-educated, well-formed adult. In New Zealand, such education is forbidden in State primary education. Many people think it is forbidden in our secondary education also. It is not. There are NCEA Achievement Standards available in Religious Studies, and I would argue that philosophical understanding, agility with different ethical theories, and knowledge of the major world religions should be not just allowed but normal in our education system. Islam’s attitude to banking and alcohol should not be something that surprises people. We need to value conscience. And we need to encourage rather than discourage growth and change, and that includes changing one’s mind.

Christianity, in fact, also has a long history of opposition to giving and receiving interest, and Islam is simply continuing this biblical position which was abandoned by the majority of Christianity. Not understanding this part of our Western history means not understanding a fundamental driver of Anti-Semitism which ultimately led to the Holocaust. The Lateran Council of 1515 (intelligent Roman Catholics pay attention) teaches: “This is the proper interpretation of usury when gain is sought to be acquired from the use of a thing, not in itself fruitful (such as a flock or a field) without labour, expense or risk on the part of the lender.” In Rerum Novarum (1891), Pope Leo XIII’s denounced “voracious usury … an evil condemned frequently by the Church but nevertheless still practised in deceptive ways by avaricious men”. Little by little, Roman Catholicism followed Protestant flexibility with biblical teaching in an increasingly capitalist culture. But deeper thinking around issues from the Third World Dept to the so-called “credit crunch” of 2009 should be open to the biblical and Islamic critique of lending at interest.

Finally, this story is a clash of religions. A fair definition of “world religions” is the eurocentric search for what, in another country or continent, played the role that Christianity did in Europe. Rugby plays that role in New Zealand. It is notable that most of the online reporting and debating around this story takes place under the banner, “Rugby heaven”. Kiwi religion is syncretistic, combining the local cult of Rugby with the international religion of money.

But wait! There’s more! It has now been reported that “Sonny Bill Williams will replace a bank’s logo on his Blues jersey with an advertisement for Plunket for the rest of the Super Rugby season… The child support agency is also a core backer of the rugby side.” Many of my friends find the thought that the charity that holds appeals for financial support for babies and families is now suddenly appearing as a sponsor of a Rugby team! When you donate to Plunket, they ask, what percentage goes to the Blues?!

More on
Rugby heaven
Jesus the All Black
Rugby and Celibacy

A Bishop is not a Priest