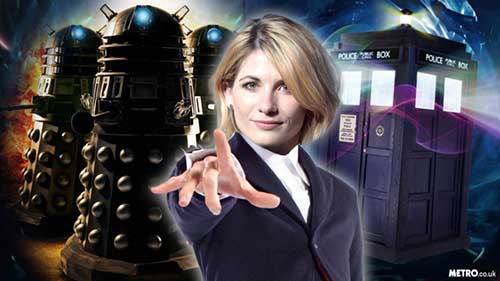 Yesterday, I started the day by joining a discussion that interlocked The Doctor being regenerated as a woman, women priests, and the possibility that if the incarnation happened today this could be a female. Having made my comments, I soon discovered that I had inadvertently joined a discussion not of a hypothetical female incarnation of The Doctor, but after the formal announcement that the 13th (and last possible?) incarnation will be acted by Jodie Whittaker.

In the discussion – around women as priests and God becoming incarnate as a woman – I asked, “What about representations of Jesus as European, or Maori, or tall, or seriously healthy, good looking, with long, clean, flowing hair?… The Doctor doesn’t have gender and sex like we humans do – I have long thought if The Doctor regenerated as female that would be seriously cool.” For liturgical Dr Who nuts, I then alluded to the “both our hearts” prayer prayed daily for centuries at Evensong.

Let’s press just a little deeper, drawing on the Doctrine of Recapitulation by St Irenaeus: What is not taken on/assumed in the incarnation is not redeemed/healed. The Word, in the incarnation, did not take on femaleness. Hence, femaleness is not redeemed. Unless you want to argue that only men are redeemed, we must conclude that neither maleness nor femaleness are part of our redeemed nature. Maleness and femaleness are not at the deep core of our being present in the Resurrection Life.

This leeds to a deeper reading of Gal 3:27-28: “As many of you as were baptized into Christ have clothed yourselves with Christ. There is no longer … male and female; for all of you are one in Christ Jesus.”

Sex and gender are wonderful creations of God. Sexual yearning is a wonderful sacrament of our yearning for God and God’s yearning for us. Being human is yearning enfleshed. But to give God gender, or to take gender language about God literally, is idolatrous.

If women cannot represent Christ, then Christ cannot represent women. For those who have any representative dimension to priesthood at all, ordaining females is a logical consequence of baptising females. It may have taken a couple of millennia wake up to the logic (just as it did for slavery; just as it seems to currently in other areas of church life).

In the 1980s, the creator of Dr Who urged that a woman take the role in one of the regenerations. As one committed to equality, I am delighted that, three decades later, this is becoming a reality. The Master has been played by a woman. Now The Doctor will be too. That the decision is controversial is fascinating. That there is crossover into theological discussions is wonderful.

7 thoughts on “A Female Christ and Dr Who”