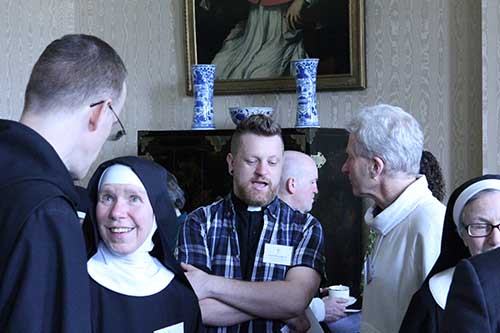 Archbishop of Canterbury Justin Welby made the first of his three priorities for his ministry The renewal of prayer and the Religious Life.

On Friday the 28th of March, Justin Welby welcomed over a hundred members of a broad range of Anglican religious communities to Lambeth Palace to discuss the renewal of Religious Life within the Church.

It is – or should be – impossible to imagine a church that flourishes without the flourishing of Religious communities as an integral part of the body of Christ.

It is – or should be – impossible because, it is our life in Religion, in contemplation, in prayer and community around a Rule and around worship, that makes us more than an NGO with loads of pointy roofed old buildings. Stanley Hauerwas in one of his sermons comments that the church should always be engaged in doing things that make no sense if God does not exist.

Life in Religion is the ultimate wager on the existence of God. Through it people subject themselves to discipline, to each other in Community, however difficult and odd each other is (and I suspect that you have an internal wry smile at how odd some people can be), and they subject themselves above all to prayer.

In the Rule of St Benedict the heart of the monastic life is obedience, an absence of grumbling, a commonality of goods, a balanced life of work, prayer and study, not in any sense because through these remarkably tough disciplines human beings become self referentially better, but because they are there to encourage each other in walking more and more deeply into the light that is Christ….

We start with Benedict, of course, who set out to grow closer to Christ and incidentally saved civilisation, as a collateral benefit. We have Cluny; we have my favourite and great saints of the North-East of England, from the time of Cuthbert through the great communities in Durham, Lindisfarne. . . The communities of the North-East that, springing from life in Religion, converted Scandinavia and the whole of Germany and northern Europe, the overflow of grace that reached out across Europe.

And then you get to Francis at a time when the church across Europe was as corrupt as it has probably ever been. In England, we go along a few centuries, we come to the Methodists, who live not in communities in the same form but under a Rule, under a Method, and there again we saw the Great Awakening.

In February, at Archbishop Justin’s invitation, a group from the ecumenical religious community of Chemin Neuf moved into Lambeth Palace to undergird the life of prayer there.

Religious Life regularly has an ecumenical dimension (Taizé, the shared life of Camaldolese and The Order of the Holy Cross,…) even an inter-religious dimension…

CHRISTIANS are being killed in Africa as a consequence of liberal attitudes towards homosexuality in the United States and Britain, the Archbishop of Canterbury suggested on Friday.

Emotional blackmail spreads once it is allowed to start. Welby is being blackmailed by those who not so subtly threaten to kill Christians if the “western world” becomes more tolerant to lgbt people. He then passes this along to the US and Britain, cooperating in the extortion.

People should not base their right actions on the possible wrong actions of others. This holds the doing of good hostage to those who do evil.

I think the secondary problem I have with Archbishop Welby’s off-the-cuff interview (the primary being the implicit emotional blackmail) is that while he cites forms of violence allegedly caused by reaction to American actions as well as homophobic assaults and indignities, he does not appear to see that it is fear of homosexuality that is at the root of both. The purported violence against the African Christians for being co-religionists with Americans or Canadians who are gay-friendly is just an expansion of the violence against Africans who are gay or lesbian, and stems from the same fears as the homophobia and violence that occurs in England and America, too.

But rather than connecting the dots, Welby simply places two things side by side, saying there is a need to “listen carefully” while apparently not hearing the painfully obvious connection in his own words. He seems to describe this as two separate problems instead of one; he is like a doctor who lists two symptoms without realizing there is an underlying disease at work. — and the answer or treatment (which he doesn’t fully approve) is the movement towards normalizing same-sex relationships, including marriage.

King’s Letter from Birmingham Jail would be good reading for him indeed. We do not turn back from Calvary, but go forward, sometimes with suffering.

The Very Rev Kelvin Holdsworth is also worth reading about this.