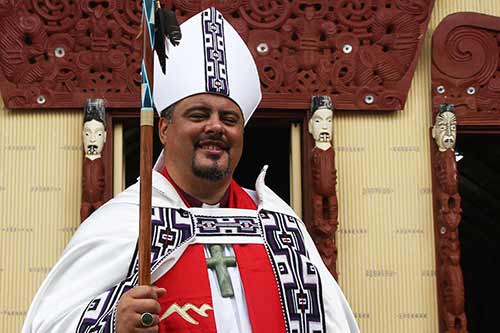 I am delighted with the announcement by Archbishops Philip Richardson and Winston Halapua that Bishop Don Tamihere is the next Pihopa o Aotearoa, sharing the primacy of the Anglican Church in Aotearoa, New Zealand and Polynesia (ACANZP).

An electoral college held during Te Runanganui of Te Pihopatanga, which met in Nelson in September 2017, nominated Don. That nomination, unanimous across the houses of laity, clergy, and pihopa (bishops), was ratified by the house of bishops of ACANZP, and approved by a ballot of members of the General Synod Te Hinota Whanui.

Don has Ngati Porou ties and connections with Turanga and Kahungunu iwi. He was born in Gisborne in 1972 and grew up on the Coast. He studied for the priesthood at St John’s College, Auckland, and was ordained a bishop last year to be Te Pihopa o Te Tairāwhiti, succeeding Bishop Brown Turei. He now also succeeds Archbishop Brown, who died in January 2017, in the role of Pihopa o Aotearoa.

We, who gather around this site, assure Pihopa Don of our prayers, and for his whanau, for Te Pihopatanga, and for the wider church.