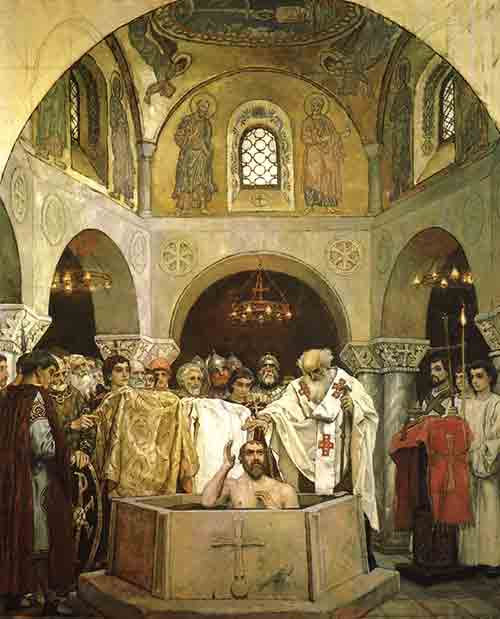 My contention, in the first post of two, is that our current, ecumenically-agreed practice of baptising with a verbal, formulaic proclamation “…in the Name of the Father, and of the Son,…” is not the way that baptism occurred in the New Testament period. In no way do I want us to abandon our ecumenical agreement, but I also want us to be honest: what we have evolved to now is not how baptism was done originally.

Having argued this position in my previous post, I now need to show that this is consistent with the evidence of the earliest church beyond the New Testament period.

In response to my first post, the opposite was contended: that my argument is defeated through the evidence of the earliest post-New-Testament documents.

Not so, say I. We continue to read these documents with anachronistic lenses. Our English translation of Didache 7:1 might read:

Concerning baptism, baptise thus: Having first rehearsed all these things, “baptise, in the Name of the Father and of the Son and of the Holy Ghost,” in running water.

but the original Greek, of course, has no such speech marks:

When we look at Chapter 61 of Justin Martyr’s First Apology (155-157 CE), my argument is reinforced:

Then they are brought by us where there is water, and are regenerated in the same manner in which we were ourselves regenerated. For, in the name of God, the Father and Lord of the universe, and of our Saviour Jesus Christ, and of the Holy Spirit, they then receive the washing with water.

Those who want to find a consistent verbal formula declared out loud in the Early Church here, then, would have Justin Martyr’s version being: “… in the name of God, the Father and Lord of the universe, and of our Saviour Jesus Christ, and of the Holy Spirit”.

In the third century, The Apostolic Tradition of Hippolytus (Chapter 21) gives evidence that our practice of a verbal formula declared out loud has not yet developed in his experience:

12When each of them to be baptized has gone down into the water, the one baptizing shall lay hands on each of them, asking, “Do you believe in God the Father Almighty?” 13And the one being baptized shall answer, “I believe.” 14He shall then baptize each of them once, laying his hand upon each of their heads. 15Then he shall ask, “Do you believe in Jesus Christ, the Son of God, who was born of the Holy Spirit and the Virgin Mary, who was crucified under Pontius Pilate, and died, and rose on the third day living from the dead, and ascended into heaven, and sat down at the right hand of the Father, the one coming to judge the living and the dead?” 16When each has answered, “I believe,” he shall baptize a second time. 17Then he shall
ask, “Do you believe in the Holy Spirit and the Holy Church and the resurrection of the flesh?” 18Then each being baptized shall answer, “I believe.” And thus let him baptize the third time.

There is certainly no question that this different formula is regarded as valid by the West.

Now that we have established that our current agreed practice of baptising with a verbal, formulaic proclamation “…in the Name of the Father, and of the Son,…” was not the way that baptism occurred in the New Testament period and was certainly not the universal practice even into the third Christian century, we are left with the questions: when and where (and why) did our practice begin? And how and why did it spread? Which document is the earliest indisputable occurrence of our current practice? These are not rhetorical questions.

Read further in How To Baptise?