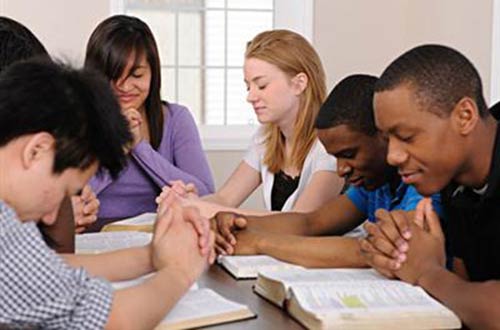 I pray Daily Prayer. It is also called the Divine Office, the Breviary, the Liturgy of the Hours, Morning and Evening Prayer, Matins and Evensong, and Compline, Lauds, Vespers, and so on and so on… This discipline of praying psalms, reading a passage(s) from the scriptures, and interceding and giving thanks… this discipline that is followed many times a day, around the globe, day in, day out, week in, week out, season upon season, year after year, back millennia, with and through the synagogue into the mists of time…

Do you want to join in? One of the cool things about it is that if you miss one of your prayer times, you know others are still carrying on this earth-circling wave of prayer. And whenever you do join in – that’s exactly what we are doing: joining the endless round of prayer and praise. In fact being inserted into Christ’s prayer, into God’s inner life…

So, you pick up a prayer book – what do you do? Well, you can ask someone who is already following this discipline (I, as have many, many others, have prayed like this for decades. Roman Catholic clergy and sisters and brothers in religious orders as well as many others do this daily. Anglican and other denominations also have this discipline…) You can follow the instructions within the book. And a bit of trial and error. It’s great if you can pray this way with someone else.

There’s lots of different websites and apps that help. Put a search in this website’s search box (top right) and you’ll find lots on this site. There’s the Chapel here.

I have, for many years, used the Benedictine Daily Prayer (BDP) (it even has a facebook group). I now use the second edition. And the Daily Office on facebook. You can pray the Daily Office using your phone.

Roger Sessions provides an introduction to how to use this BDP here. [First edition, here]

The Responsories can be a trick for new players. You encounter something like:

Recently, there was a new review of the BDP mentioned on this site. Fr. Mark Michael was highly encouraging of the use of the BDP, but he became seriously confused about its psalter:

The Grail Psalter is the cross that must be borne by users of the book, perhaps out of the deep local loyalty that also makes Minnesota winters endearing to the good monks in Collegeville. The current Grail translation is the work of a native hero, Abbot Gregory Polan of Conception Abbey, Missouri, who is both a graduate of the seminary based at the abbey and the abbot primate of the Benedictine Order. …

But worshipers whose prayers have been shaped by the evocative cadences of the Coverdale Psalter or its careful modernization in the Book of Common Prayer will surely find themselves wincing at the translation’s seeming knack for being both banal and convoluted. Yoda may not have been a Benedictine, but one must wonder if he didn’t serve on the Grail Psalter’s advisory committee, when stumbling to pray Psalm 120 (121):

May he never allow you to stumble!
Let him sleep not, your guard.
No, he sleeps not nor slumbers,
Israel’s guard.

The translation, in fact, repeats the word guard six times in this short psalm. The recitation of this text five days a week at Terce surely did not leave me guarded from impatient and uncharitable thoughts.

The translation used in the BDP is, of course, not the Revised one by an individual, Abbot Gregory Polan, that Fr Mark thinks is being used. As the BDP has on its copyright page, it uses the 1986 revision of the 1963 Grail Psalter. This is the version with roots going back into the 1950s and is the version used across all the major Roman Catholic liturgical works for the past few decades.

It is Fr Mark’s personal right to like his TEC BCP’s “watch over” better than “guard” – but by saying Yoda produced the six-fold repetition of “guard” in this short psalm, he declares a new Tetragrammaton for the author of this psalm – for, yes, the original does, indeed, use שָׁמַר six times in the original Hebrew text – something obscured in his much-loved BCP version.

Do add your own experiences, resources, ideas, and questions in the comments section. And let us remember each other, and all who gather around this site, as we pray.