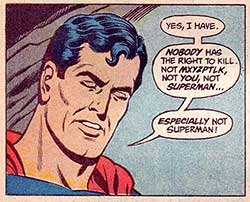 Is Warner Brothers proclaiming a false Christ? And why?

I went to see the movie Man of Steel. It’s fine enough as a movie in that superhero genre. But the main distraction for me was the heavy-handed, in-your-face Bible story, Jesus story.

We realise that the original superman comic books were the creation of two Jewish highschool students, Jerry Siegel and Joe Shuster. The Jewish themes have always been obvious, and the Jesus overtones have always been there too. His name, Kal-El, gives it away, with El being one of the Hebrew names for God that keeps turning up in the Bible: Israel, Samuel, Michael, Daniel. Kal-El. In this movie the Moses in the basket scene, as he is sent from Krypton, is obviously overdone. But we always knew it was there.

The Jesus story, in Man of Steel, is laid on in truckloads. He has an unusual conception and is raised by a step-dad.

There is obviously his talking to his Father. He hides his supernatural gifts until he reveals himself when he is in his 30s. And then, after performing many great deeds – wait for it… at the age of 33 he hands himself over to the authorities. And is shackled before being interrogated.

The Father says to the Son: “You can save them all”, at which point the Son is seen in a grand, arms-extended, crucified pose.

He is called to be a bridge, making both the human world and the world he comes from one in himself. [This reduces the Docetist tendencies in the superman tradition].

The church as the Body of Christ is alluded to in the body of the Son being composed of many individuals – in fact, all possible individuals.

The sermons in the movie come thick and fast: take a leap of faith. Faith comes before trust. Whether having a moral conscience weakens a person. 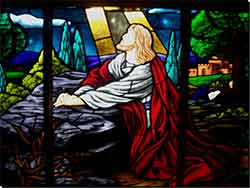 In the movie, it got to the ridiculous when Clark Kent agonises over which choice to make. He does so in a church, in the presence of a priest while, behind him, there is a stained glass window of Jesus agonising over his decision in the Garden of Gethsemane. Jesus in the stained glass window has a red cape.

I was reeling from all this, and couldn’t work out what the producers of the movie thought they were doing! I am still not sure.

The stuff you use to fill the pews

When I went online to do some research on this – it got worse. Much worse. Not only is it on purpose – that’s pretty obvious; it is SO overt it couldn’t possibly be accidental. Holywood studio Warner Brothers teamed up with a specialist marketing firm and, as part of that, they have produced a sophisticated website for pastors to make the connections. There is a nine-page pamphlet “Jesus – the Original Superhero”. There are not just sermon ideas and outlines, but whole sermons there – a number of them. Complete with powerpoint images and video clips – “show the following video clip now”, and so on. All with the tagline, “The stuff you use to fill the pews“!!!

Father’s voice: Goodbye my son. My hopes and dreams travel with you.
Another voice: He will be an outcast. They will kill him.

He will be a god to them.

I have to believe that you were sent here for a reason.
You will give the people of earth an ideal to strive towards.

They will rest behind you. They will stumble. They will fall.
But in time they will join you.
In time you will help them accomplish wonders.

There are special showings of Man of Steel for pastors to see the film for free.

What is going on here? As I’ve already said: I am not totally sure, but – I seriously think that it is worth pausing and at least noticing and asking the question, “what is going on here?” Because even comic-book fans are entering the debate (see, for example, here and here). Because Superman kills. That is contrary to the Superman canon. There is a famous superman quote: “Nobody has the right to kill, …not even superman, especially not superman!” In this film he doesn’t just kill one person. There are interminable battles; Metropolis is devastated. Thousands are killed without much thought and with no regret following. Some describe the scenes of devastation as disaster porn. 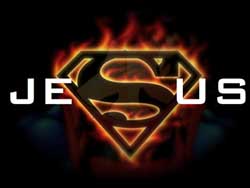 What is ultimately being presented in the movie Man of Steel is the very opposite saviour message of the Man of Nazareth. Man of Steel is teaching that our salvation is by force – by us being stronger than them. Might, power, weapons, fighting – these are what we need to do. If thousands of innocents die as collateral damage, we do that without second thought. If whole cities are destroyed, we do that without second thought.

How different that is to the way of Jesus, the spirit of gentleness, and of service, of bearing another’s burdens, of boasting only in the cross, of words of peace.

I do not know what Warner Brothers think they are up to and why they are putting such energy into getting churches to be part of telling this new story. A god of might, power, destroying enemies is popular in many communities, preaching, and singing. The Warner Brothers Man of Steel false Christ imaging hooks straight into that at a time of debates about gun control, escalation of Middle East instability, and longer-term preparations for the next Presidential elections in USA. The movie stresses that this is an American saviour.

I’m not advocating some sort of conspiracy-theory approach to life. What I am advocating is that we do not drift through life and accept whatever story other people insert us into.

There is a moment of authentic Christ image in the Man of Steel movie – ironically the moment when the possible use of supernatural power is restrained in love for the greater good focuses not around Clark Kent, but is an action by his human foster dad.