Then the Lord God said, ‘See, the man has become like one of US

There’s a lot of eisegesis (“the process of interpreting a text or portion of text in such a way that the process introduces one’s own presuppositions, agendas, or biases into and onto the text”) about the plural for God in Genesis. The first quote, above, is particularly popular currently as a prooftext in sexuality debates.

Christians have traditionally seen this verse as adumbrating the Trinity. It is now universally admitted that this was not what the plural meant to the original author. Gordon J. Wenham in Word Biblical Commentary, Vol. 1: Genesis 1-15 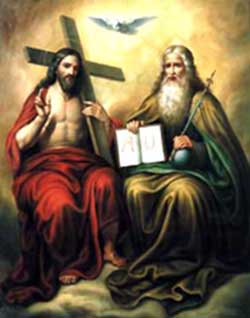 Furthermore, I have great empathy for those who wonder why the eisegesis of this text leads from a general imaging of two men and a bird to only a male and a female can live in a committed relationship.

It is certainly of interest that the plural for the deity is present in both creation accounts (P and J). Although the issue is obviously more complex than a brief blog post, to keep it simple, the honest reading of these texts leads to an interpretation that the author(s) had a monolatrous understanding.

The earlier layers of the Bible evidence not monotheism (as we would now understand this) but monolatry, “the recognition of the existence of many gods, but with the consistent worship of only one deity”. Once one recognises monolatry as the approach in early layers of the Bible, a lot of other texts suddenly make much more sense (eg. Psalm 82; even the ten commandments).