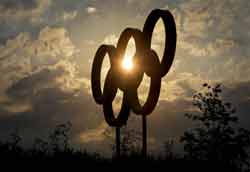 There is so much we can reflect on in relation to the Olympics and religion; Olympics and spirituality – it is difficult to know where to start…

The overt religious aspects of the opening ceremony: the hymns Abide with Me, Cwm Rhondda, Jerusalem… the dynamics of that ceremony as a lesson to (and from) liturgy. The sermon-like speeches. The central, obvious presence of the Archbishop of Canterbury…

What about the incessant questions of religion that are never asked of sport. Eg. a group yelling at a television screen for “their” team, their country – the team cannot hear them; it affects nothing, changes nothing… yet we do it without questioning… it changes us who do the yelling… it forms us, the group, yelling at the TV, it changes us, strengthens our bonds…

Having places to pray and meditate in the Olympic village…