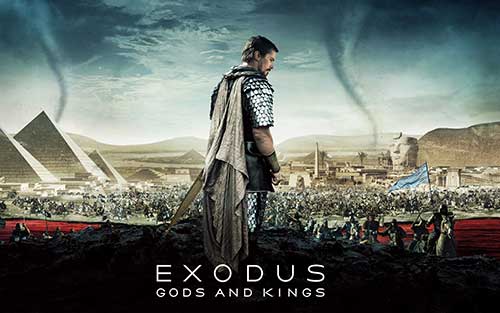 Where were Miriam and the Midwives?!

I went to the film Exodus: Gods and Kings with low expectations – you’d have to have been living under a rock to have missed the controversy of having all-white casting. But I was totally unprepared for the excision of the significant women from the story. And I have yet to see a reviewer focus on that!

Every year at Easter, at the very least, we proclaim the end of the Exodus:

Then the prophet Miriam, Aaron’s sister, took a tambourine in her hand; and all the women went out after her with tambourines and with dancing. And Miriam sang to them:
‘Sing to the Lord, for he has triumphed gloriously;
horse and rider he has thrown into the sea.’ (Exodus 15:20-21)

Here, in the film, the Exodus ended, and (tell me I’m wrong) Miriam wasn’t even anywhere to be seen!

The Bible was produced in a sexist context, often skimming over the significance of women, and not even giving their names. But the Biblical Exodus story begins with two midwives defying the order of the Pharaoh. The Bible celebrates this nonviolent defiance of unjust (male) authority, which has so much to teach us, and passes on their names: Shiphrah and Puah.

The film makes no mention of the midwives whatsoever! And with them goes the wise bravery of Moses’ mother, Jochebed, and her clever ruse accomplished with Miriam.

It is not as if the Exodus film is averse to the ruse, the Biblical basket story, in fact it tells an altered version of it. But why did it not show it in a flashback?!

I have no problem with Ridley Scott, the director, being an atheist, and his attempt to make the story be understood naturalistically. I just think that, even more than many other movies, the book is SO much better than the film.

This is a lengthy film (two and a half hours). The (lengthy, not-in-the-book, macho) battles with the Hittites add little to the story, nor does the searching for the (adult) Moses, and the execution of people each day he is not found. If you wanted to show the ruthlessness of the Egyptians, the Bible’s killing of the babies (not mentioned in the film) does that so much better. Why have Ramesses (chasing Moses and the Hebrew slaves to the sea) cross a mountain and lose many of his army to bad driving by a steep road rather than in the sea? And why have Moses throw his sword into the sea, rather than the biblical staff?

The petulant child (male again!) representing the God image in the mind of the (presented-in-the-film-as-probably-insane) Moses is not only peculiar but woodenly acted by 11-year-old Isaac Andrews.

Other reviewers have commented on the poor music, the already dated feel of the film, and the Prince-of-Egypt-type representation of Moses’ relationship with Ramesses and connected that with the director’s relationship with his director brother who committed suicide in 2012 and to whom the film is dedicated.

I agree with Ellen White (a senior editor at the Biblical Archaeology Society),

[The story in the film] was so different that if they didn’t use the Biblical names and released the same movie with a different title, I might not have even recognized it.

Yes – the book is MUCH better! The film is a prejudiced white macho version of a story that was more liberated and inclusive three millennia ago!