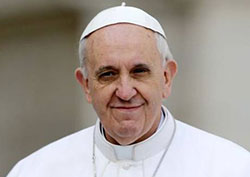 Pope Francis keeps being in the news. If it is not for an exorcism, it is for declaring that “Good Deeds, Not Belief In Christ, are Required For Salvation”.

Actually, Pope Francis never said that – but why let the facts get in the way of a good controversy.

What about: “Pope Francis Says Atheists Who Do Good Are Redeemed, Not Just Catholics”? Nope – didn’t say that either!

I know what the Pope actually said may bore some, but I think it is worth a second look. The pope is calling for a culture of encounter which includes all, Catholics, non-Catholics, atheists…

The Pope’s homily was on Wednesday 22 May, the Gospel reading being [woops! mention of exorcism again!]:

John said to Jesus, ‘Teacher, we saw someone casting out demons in your name, and we tried to stop him, because he was not following us.’ But Jesus said, ‘Do not stop him; for no one who does a deed of power in my name will be able soon afterwards to speak evil of me. Whoever is not against us is for us. [Mark 9:38-40]

So let’s go to second-hand (Vatican Radio), not third-or-more hand. In the Pope’s homily, he said:

The Lord created us in His image and likeness, and we are the image of the Lord, and He does good and all of us have this commandment at heart: do good and do not do evil. All of us. ‘But, Father, this is not Catholic! He cannot do good.’ Yes, he can. He must. Not can: must! Because he has this commandment within him. Instead, this ‘closing off’ that imagines that those outside, everyone, cannot do good is a wall that leads to war and also to what some people throughout history have conceived of: killing in the name of God. That we can kill in the name of God. And that, simply, is blasphemy. To say that you can kill in the name of God is blasphemy.

Instead, the Lord has created us in His image and likeness, and has given us this commandment in the depths of our heart: do good and do not do evil.

The Lord has redeemed all of us, all of us, with the Blood of Christ: all of us, not just Catholics. Everyone! ‘Father, the atheists?’ Even the atheists. Everyone! And this Blood makes us children of God of the first class! We are created children in the likeness of God and the Blood of Christ has redeemed us all! And we all have a duty to do good. And this commandment for everyone to do good, I think, is a beautiful path towards peace. If we, each doing our own part, if we do good to others, if we meet there, doing good, and we go slowly, gently, little by little, we will make that culture of encounter: we need that so much. We must meet one another doing good. ‘But I don’t believe, Father, I am an atheist!’ But do good: we will meet one another there.

Doing good is not a matter of faith. It is a duty, it is an identity card that our Father has given to all of us, because He has made us in His image and likeness. And He does good, always.

Let’s put to one side the recent years of the Vatican working so hard to forbid using the words in the liturgy that Christ’s blood is shed “for all” and insists that the faithful hear Sunday by Sunday, liturgy by liturgy, that, instead, Christ’s blood is shed “for many“! Let’s also put to one side the scrambling of those who want to maintain the us-verses-them dualism, by parsing the Papal pronouncement by parting “redemption” from “salvation”!

Come on. What the Pope is saying is nothing new. The only possible novelty is that it is the Pope who is saying it! And saying it by riding on other “culture of…” declarations. The Pope is calling for a culture of encounter. This is not about me and my self-focused obsession with individually going to heaven (which is how many of the headlines and discussions are framing it). This is breaking out of those fenced-off approaches to a culture of encounter in which we meet the good atheist alongside the good theist – together doing good for others.

12 thoughts on “the Pope and heaven”