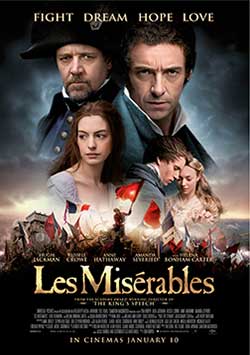 I said recently that film might be one of the last places where real enchantment is still experienced. And mainstream cinema, to reinforce my point, has been giving us a good measure, pressed down, shaken together, running over, into our lap. The Hobbit, Life of Pi, and now Les Misérables.

The movie is the first of the musical version of the French historical novel by Victor Hugo, first published in 1862.

With archetypal themes, statements, events, and characters it intertwines deeply with our spiritual life. There is evil, love, forgiveness, guilt, grief, commitment, life after death, the church, a good bishop, God, Christ,…

Toward the end of the novel, Hugo explains the work’s overarching structure:

The book which the reader has before him at this moment is, from one end to the other, in its entirety and details … a progress from evil to good, from injustice to justice, from falsehood to truth, from night to day, from appetite to conscience, from corruption to life; from bestiality to duty, from hell to heaven, from nothingness to God. The starting point: matter, destination: the soul. The hydra at the beginning, the angel at the end.

I have previously offered myself as a Liturgical adviser to Hollywood and am saddened and surprised that his film spurs me to make that offer once again. Although, in liturgy now, some vestments are specifically designed to have the stole laid over the chasuble, I do not believe that in the nineteenth century this would have been worn in the manner depicted in the movie.

That aside, the minor character of the bishop is central to the story. Victor Hugo’s son, then in his 20s, argued, following popular anticlericalism, that the person who launches Jean Valjean’s transformation be someone from a secular profession. But Monseigneur Bienvenue’s (Bishop Welcome) significance was increased rather than decreased by the author. For Victor Hugo corrupt priests would be shamed in comparison to the ideal he was holding before them.

The bishop has Valjean keep the silver, protects him from the police, and as a Christ-figure and mediator of Christ “buys” the ex-convicts soul for God with two silver candlesticks, telling him to use the treasure to begin a virtuous new life.

The bishop breaks the command against lying to save Valjean. Javert, the antagonist, knows only keeping the law. This is his undoing.

[Interesting bit: Colm Wilkinson, who plays the bishop in the movie, played the role of Jean Valjean in Les Misérables when it first came out as a stage musical.]

The book, the musical, and now the movie are gifts to our spiritual lives, and to our preaching, and teaching, and living. 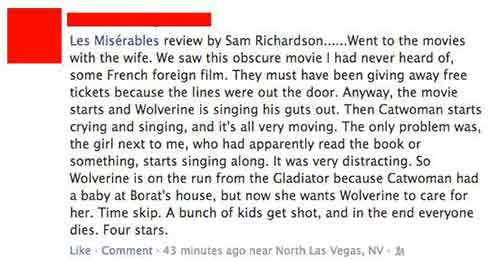