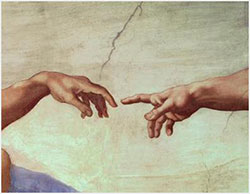 We’ve been discussing the story here recently: mild-mannered reporter Clark Kent, reporting for the Daily Planet, in the city of Metropolis, is really Superman pretending to be a weak, ordinary human being like me; but really he has come to this planet from out there and with his superpowers he will save us all from evil.

We believe in one Lord, Jesus Christ,
the only Son of God,
eternally begotten of the Father,
God from God, Light from Light,
true God from true God,
begotten, not made,
of one being with the Father;
through him all things were made.
For us and for our salvation
he came down from heaven,
was incarnate of the Holy Spirit
and the Virgin Mary
and became fully human.

The Creed “sounds like Superman to me”, you might rightly say. God, it seems to say, (and it lays it on thick: “God from God, Light from Light, true God from true God, begotten, not made,”) God comes down to earth and the mild-mannered carpenter working in the backwater of Nazareth is really God pretending to be a weak, ordinary human being like me, but really he has come to this planet from out there and with his superpowers he will save us all from evil.

Except … Christian orthodoxy is clear: that is false.

But wait – there’s more! The Council of Chalcedon (451) declared (hold onto your hats):

to be acknowledged in two natures, without confusion, without change, without division, without separation; the distinction of natures being by no means taken away by the unity, but rather the property of each nature being preserved…

OK. I’ll translate that into English. Jesus – read my lips – Jesus is exactly as human as you and I are. There is no secret trapdoor to some sort of God bit of him. Jesus couldn’t do differential calculus, he couldn’t speak English, and he would have freaked out like everyone else if Dr Who appeared with an iPhone 5. Jesus is fully human. FULLY human.

Nicaea and Chalcedon also declare that Jesus is fully God. Now – if this man, this real human being making tables, chairs, and carts in Nazareth 2,000 years ago actually is God – then maybe, just maybe, that changes what we mean by the word “God”.

This is the eighth post in a series on the Creed.