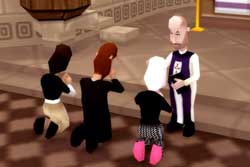 Mark Howe on Ship of Fools wants people to experiment in online communion. Mark contends that those against this do so out of a “denial-and-emotion response”.

I see online mission and ministry to be essential in the third millennium. This is a newly-discovered land in which so many people now live. The church is slow to provide mission and ministry in this new land of the online world. It is often brushed off as puerile. Encouraging “experiments” in twitter sacraments and the like does nothing to enhance ministry and mission online, but reinforces the appearance that the church online is for wacky, nutter, extremists.

Mark sets up a dualism: “real” and “unreal”, attacking those who are cautious about virtual sacraments as claiming virtual is equivalent to unreal.

Mark also puts a lot of energy into showing that there is a lot of Christian diversity in opinions about sacraments. But once Mark has demonstrated Christian diversity and confusion he does not leave us with any suggested definition or theology either for sacraments or church. Twice he uses “simulcrum” when he means “simulacrum” (update: corrected now after reading this post). All we are left with is Mark’s challenge to “try some experiments”.

Mark, having already specified that Christians disagree about what communion is, what we receive, and what happens when we receive, etc., leaves me struggling to work out what he understands as possible results of his experiments? How does Mark intend to measure results? And against what standards?

In his article Mark certainly doesn’t provide something other than seeking a person’s “experience” once they try his twitter-communion experiment. In a Christian tradition that sees sacramental actions as being independent of how one “feels” about the action (you are baptised whether you “feel God’s presence” or not!) it is Mark, it seems to me, who leaves us with nothing but an “emotional response” to his call for experiments.

I have already seen quite a bit of debate on Mark’s call for experiments. You can follow the Ship of Fools own discussions on this here, and complete their online survey here.

I blogged about virtual eucharists three years ago.

Let me put some of my own presuppositions on the table:

There is so much that we can do online. There is so much that can nourish spirituality, and community. We can pray together online. We can resource each other, nourish and encourage each other. But when people urge us to experiment with online sacraments without any solid theological underpinning, guidelines, or even ideas what one might look for in “results” of such an experiment, those who take little notice of online mission and ministry just have their prejudices reinforced that online church is a sideshow for nutters: Be ordained online now! Get your virtual marriage here. Tweet this and you are baptised!

Once again, if you are seriously interested in this topic, I suggest you read my post on virtual eucharists to complement this post, as I won’t repeat all of that here. Nothing has altered my position: don’t take up Ship of Fools’ challenge to mock Christ’s sacraments by experimenting with having a communion service on twitter.