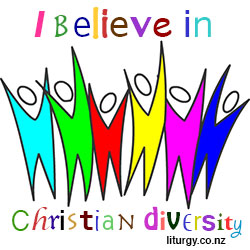 This Liturgy website announces the Week of Prayer for Christian Diversity. It runs from Sunday 27 January 2013 up to and including Sunday 3 February. An Octave of prayer.

This week celebrates difference. In the Northern Hemisphere Week of Prayer for Christian Unity I saw quite a lot of ideas that the solution was to clone and cookie-cutter one way of being a Christian and impose that on all. Unity by uniformity. One size fits all. [And a hint: that one size didn’t look much like the younger woman of colour that I suspect is greater numerically!] The God, who is the Source of Reality, is diversity held in unity, and brings to birth a universe of uncountable variety. And we, the very ones who are called to point to and embody this Source, appear to be threatened by diversity, we cannot cope with the diversity of the flowers, or the colours of the rainbow, and we try and eradicate this – so that there is only one type of flower, and only one type of colour.

This week is about being more honest. In the Northern Hemisphere Week of Prayer for Christian Unity I saw again a lot of nonsense about church history, and theology, and spirituality, and ecclesiology. “Henry VIII founded a new church because he was a randy old *&^%$! and the pope wouldn’t let him have a divorce…” and nonsense like that. [Yes, only if we agree that John XXIII founded a new church, and annulment = divorce]. And let’s be honest about the mess we are in; the mess we’ve made.

This week takes care about humour. I’ve got (at least) as much of a sense of humour as the next person. [From time to time some people mishear my points, including ones I make on this site, probably including this particular post, because they haven’t watched as much Monty Python as I have]. There was some humour during the Northern Hemisphere Week of Prayer for Christian Unity that I would have been a little more cautious about. So here’s the rules: (1) You can make jokes at the expense of yourselves and your own beliefs and practices but not by putting down, at the expense of, others. To belittle you have to be little. (eg.). (2) Even in humour, don’t put yourselves down too much. Get some therapy for a poor self-image, instead.

Finally, maybe the best bit about the Week of Prayer for Christian Diversity: you don’t have to have all your ideas consistently worked out.
This week is about lovingly accepting disagreement with others. It is also about loving accepting disagreement within yourself. Thomas Aquinas was definitely a 17.04.159-therefore-17.04.159a kind of guy, but when the true reality of God came home to him he stopped writing his attempt to get Christianity all neatly, consistently worked out. His Summa Theologiae just stops. “Everything that I have written seems like straw to me compared to those things that I have seen and have been revealed to me.” 16 thoughts on “Week of Prayer for Christian Diversity”