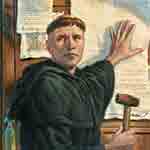 500th Anniversary of The Reformation

Translating it to today’s world, it is as if Luther sent 95 provocative tweets. Because of the printing press, the sixteenth century version of the internet, these 95 theses went viral.

A bit of honesty about the atrocities committed by Christians might help bring some balance to some contemporary attitudes. “By this everyone will know that you are my disciples, if you have love for one another” (Jesus).

I must say, I was expecting (far) more (Anglican) celebration of this significant anniversary. Perhaps Protestants no longer think there is much to celebrate. Would Luther’s protest have happened/be needed with the current Pope? There is, of course, the Sola Scriptura position not to celebrate birthdays.

In our diocese, the anniversary was marked by an article in our diocesan magazine (Anglican Life p7-9). Perhaps Anglicans are waiting (fitting in with the Anglican ‘mark’) until 23 May 2033 for the 500th anniversary of Henry VIII annulment 😉

Letter to Albert of Brandenburg

I’m sure you have probably read the letter posted to Albert of Brandenburg – you might appreciate reading it again, or some of you, for the first time:

To the Most Reverend Father in Christ and Most Illustrious Lord, Albrecht of Magdeburg and Mainz, Archbishop and Primate of the Church, Margrave of Brandenburg, etc., his own lord and pastor in Christ, worthy of reverence and fear, and most gracious.

The grace of God be with you in all its fulness and power! Spare me, Most Reverend Father in Christ and Most Illustrious Prince, that I, the dregs of humanity, have so much boldness that I have dared to think of a letter to the height of your Sublimity. The Lord Jesus is my witness that, conscious of my smallness and baseness, I have long deferred what I am now shameless enough to do, — moved thereto most of all by the duty of fidelity which I acknowledge that I owe to your most Reverend Fatherhood in Christ. Meanwhile, therefore, may your Highness deign to cast an eye upon one speck of dust, and for the sake of your pontifical clemency to heed my prayer. Papal indulgences for the building of St. Peter’s are circulating under your most distinguished name, and as regards them, I do not bring accusation against the outcries of the preachers, which I have not heard, so much as I grieve over the wholly false impressions which the people have conceived from them; to wit, — the unhappy souls believe that if they have purchased letters of indulgence they are sure of their salvation; again, that so soon as they cast their contributions into the money-box, souls fly out of purgatory; furthermore, that these graces [i.e., the graces conferred in the indulgences] are so great that there is no sin too great to be absolved, even, as they say — though the thing is impossible — if one had violated the Mother of God; again, that a man is free, through these indulgences, from all penalty and guilt.

O God, most good! Thus souls committed to your care, good Father, are taught to their death, and the strict account, which you must render for all such, grows and increases. For this reason I have no longer been able to keep quiet about this matter, for it is by no gift of a bishop that man becomes sure of salvation, since he gains this certainty not even by the “inpoured grace” of God, but the Apostle bids us always “work out our own salvation in fear and trembling,” and Peter says, “the righteous scarcely shall be saved.” Finally, so narrow is the way that leads to life, that the Lord, through the prophets Amos and Zechariah, calls those who shall be saved “brands plucked from the burning,” and everywhere declares the difficulty of salvation. Why, then, do the preachers of pardons, by these false fables and promises, make the people careless and fearless? Whereas indulgences confer on us no good gift, either for salvation or for sanctity, but only take away the external penalty, which it was formerly the custom to impose according to the canons.

Finally, works of piety and love are infinitely better than indulgences, and yet these are not preached with such ceremony or such zeal; nay, for the sake of preaching the indulgences they are kept quiet, though it is the first and the sole duty of all bishops that the people should learn the Gospel and the love of Christ, for Christ never taught that indulgences should be preached. How great then is the horror, how great the peril of a bishop, if he permits the Gospel to be kept quiet, and nothing but the noise of indulgences to be spread among his people! Will not Christ say to them, “straining at a gnat and swallowing a camel”? In addition to this, Most Reverend Father in the Lord, it is said in the Instruction to the Commissaries which is issued under your name, Most Reverend Father (doubtless without your knowledge and consent), that one of the chief graces of indulgence is that inestimable gift of God by which man is reconciled to God, and all the penalties of purgatory are destroyed. Again, it is said that contrition is not necessary in those who purchase souls [out of purgatory] or buy confessionalia.

But what can I do, good Primate and Most Illustrious Prince, except pray your Most Reverend Fatherhood by the Lord Jesus Christ that you would deign to look [on this matter] with the eye of fatherly care, and do away entirely with that treatise and impose upon the preachers of pardons another form of preaching; lest, perchance, one may some time arise, who will publish writings in which he will confute both them and that treatise, to the shame of your Most Illustrious Sublimity. I shrink very much from thinking that this will be done, and yet I fear that it will come to pass, unless there is some speedy remedy.

These faithful offices of my insignificance I beg that your Most Illustrious Grace may deign to accept in the spirit of a Prince and a Bishop, i.e., with the greatest clemency, as I offer them out of a faithful heart, altogether devoted to you, Most Reverend Father, since I too am a part of your flock.

May the Lord Jesus have your Most Reverend Fatherhood eternally in His keeping. Amen.

From Wittenberg on the Vigil of All Saints, MDXVII.

Out of love for the truth and from desire to elucidate it, the Reverend Father Martin Luther, Master of Arts and Sacred Theology, and ordinary lecturer therein at Wittenberg, intends to defend the following statements and to dispute on them in that place. Therefore he asks that those who cannot be present and dispute with him orally shall do so in their absence by letter. In the name of our Lord Jesus Christ, Amen. 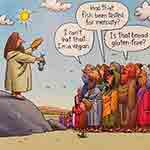 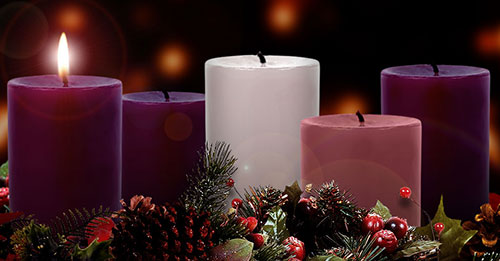