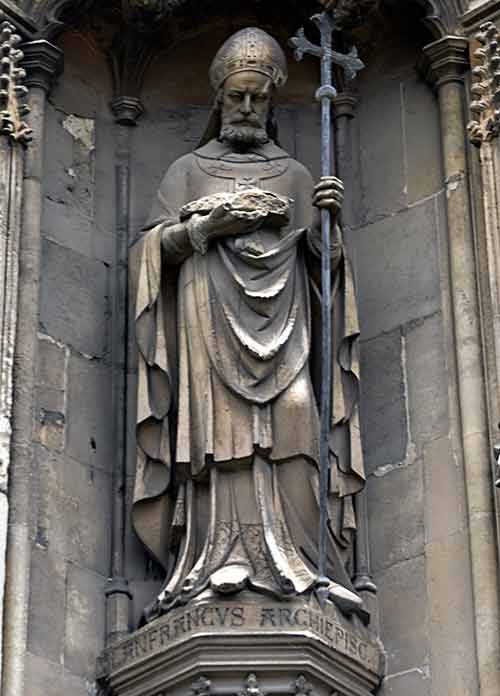 As, on Sundays, for five weeks we are reflecting on John 6, this is a good time to re-look at the Eucharist.

This post can be regarded as the fourth in a series.
Read this first.
Read this second.
Read this third.

Berengar of Tours (c. 999 – 6 January 1088) was taught by Fulbert of Chartres (960 – 1028). Fulbert taught that faith and reason are both good gifts of God, and both have their proper objects. The Eucharist, he taught, is a proper object of faith. He would have the “outer substance” of bread and wine and the “inner substance” of the body and blood of Christ.

In the second half of the eleventh century, Berengar defended the orthodoxy of Ratramnus‘ On the Body and Blood of the Lord (at that time attributed to Erigena). I won’t go into the political intrigue around the controversy at that time (ecclesiastical over civil), but Berengar escaped execution several times by recanting his holding to Ratramnus’ position and then simply continuing to teach his position when the heat dissipated.

Berengar was condemned for teaching that the bread and wine are not transformed, and claiming that Christ’s presence is intellectual (spiritual).

Berengar opposed that the bread and wine cease to exist, and that the body of Christ, as born of Mary, is physically present on the altar. He points out that in saying that the bread is the body, you are saying it is bread. He held to the understanding that accidents (eg. taste, colour) cannot be separate from the substances in which they exist. Christ’s physical body, he taught, is in heaven. Christ was sacrificed once for all, and communion is a memorial of that sacrifice (not in the sense of a mental exercise, but as a sacrament).

For Lanfranc, any reference to bread and wine, after consecration, is using those words symbolically. After the consecration, the body and blood of Christ is on the altar. Referring to them as bread and wine is referring symbolically to what was previously there. Lanfranc was attempting to combine Augustine and Radbertus (785–865).

2 thoughts on “Berengar vs Lanfranc”