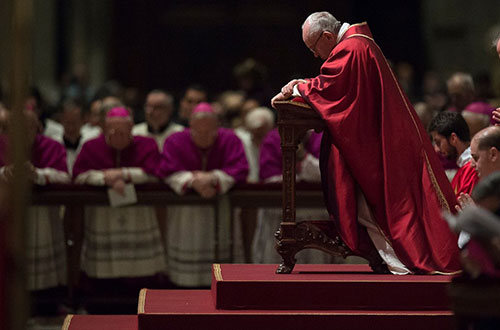 Last week, the report from the Pennsylvania Grand Jury described the abuse by hundreds of Roman Catholic priests of well over a thousand victims, and the systematic ecclesial covering up of the abuse. This week Pope Francis has responded with a Letter to the People of God (full text).

The systemic issue will need more than words. Many, many Christians, including clergy, must feel, as I do, sickened beyond words at this abuse.

As I read Pope Francis’ letter, one term he uses leaped out from the page:

With shame and repentance, we acknowledge as an ecclesial community that we were not where we should have been, that we did not act in a timely manner, realizing the magnitude and the gravity of the damage done to so many lives. We showed no care for the little ones; we abandoned them.

Pope Francis referred to Roman Catholicism as “an ecclesial community”. This is a term that has rankled, as a put-down, Christians and churches not in full communion with the Bishop of Rome.

An ecclesial community is, in the terminology used by the Catholic Church, a Christian religious group that does not meet the Catholic definition of a “Church”.

For those who have ears to hear, Pope Francis is saying that this abuse is such that Roman Catholicism is hereby not being Church. To me, that makes sense. Having the legal pipeline of apostolic succession, nicely-interconnecting doctrinal teaching, valid sacraments, and pretty liturgy – this is all forfeited through injustice, oppression, and abuse.

As, years ago now, the extent of abuse by priests and religious began to be known, Vatican responses initially were more focused on lamenting the loss of holiness of the abusers than on the suffering of the victims. At least that is no longer the case. There are still, astonishingly, those like Archbishop Paul Coakley, who blame the scourge of the sexual abuse of minors and young people on the sexual revolution and on lay people not heeding Humanae Vitae and separating sexual intimacy in marriage from fertility.

Prior to Pope Francis, a Vatican response was to bar homosexuals from being ordained. Regularly, some make such illogical leaps when debating committed same-sex couples. A tweet recently put it simply:

When someone sees a slippery slope between same-sex marriage and beastiality or pedophilia, that’s a pretty good indication that they view marriage as a pairing between a man and his sex-object, not a loving bond between two consenting adults of sound mind.

Thankfully, the Vatican appears to be starting to get it – this isn’t about wholesome sex; this is about power and its abuse. Pope Francis gets that this is about clericalism:

Such is the case with clericalism, an approach that “not only nullifies the character of Christians, but also tends to diminish and undervalue the baptismal grace that the Holy Spirit has placed in the heart of our people”. Clericalism, whether fostered by priests themselves or by lay persons, leads to an excision in the ecclesial body that supports and helps to perpetuate many of the evils that we are condemning today. To say “no” to abuse is to say an emphatic “no” to all forms of clericalism.