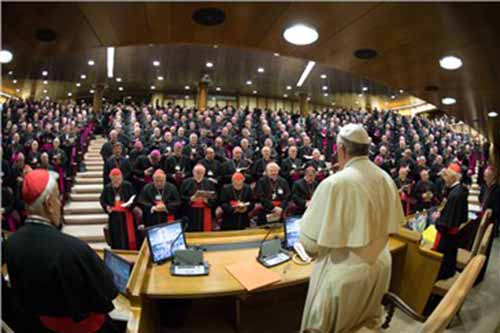 A lot of expectation is around allowing remarried divorcees to receive Holy Communion. Traditional Roman Catholic logic runs something like this:

A somewhat different approach is followed by Cardinal Walter Kasper

Cardinal Walter does not understand the second union (a civil marriage after divorce) as a sacramental marriage, but he says it possesses some of the “essential elements of marriage and of a family: there is love, there is commitment, there is exclusivity, there is forever, there is prayer life, there are children, they’re well-educated in Christian life. Many things are there and especially there is a public dimension.”

Matthew 19:9 is used as a proof text on both sides of the debate. The normal Roman Catholic understanding of the text is:

I say to you, whoever divorces his wife (unless the marriage is unlawful) and marries another commits adultery.

…Several Church Fathers suggest Jesus allowed for divorce in cases of serious sexual sin such as adultery, but he never permitted remarriage after divorce. The spouses may separate in these circumstances by a legal arrangement of living apart, but they cannot break the marriage bond, and they are not free to remarry. This view finds support by a consideration of the Greek word porneia, translated “unchastity”, in Mt 19:9. While the word has a broad range of meaning, it can mean “adultery”, as in the Greek OT (also translated “harlotry”; Sir 23:23; Ezek 16:33; Hos 2:2). Thus, an adulterous situation may give cause for separation so long as the spouses do not embark upon a second marriage. This squares with St. Paul’s teaching that a separated couple has only two options: be reconciled to one another, or remain single (1 Cor 7:10-11).

…(A second) position interprets “unchastity” in Mt 19:9 as invalid marriages where the spouses are too closely related. Thus, “except for unchastity” (Mt 19:9) means “except where unlawful unions exist”. Such unions ought to be severed because of the impediment posed by near blood-relations. A divorce under these conditions does not sunder a true marriage bond because a valid marriage never existed. It is equivalent to an annulment.…

…According to (yet another) position, Jesus sets aside Jewish debates over the grounds for divorce in the Old Covenant (Deut 24). Because Jesus is revoking the OT concession on divorce, he brackets the whole issue and sets it off to the side as irrelevant. Thus, “except for unchastity” (Mt 19:9) means “regardless of the OT grounds for divorce”. Jesus refuses even to comment on Deut 24:1. To do so would blunt the force of his own teaching, since he is not clarifying or reaffirming Moses’ permission, he is abolishing it.…

Anglicans were in a position not dissimilar to Roman Catholics currently. And some Anglican Churches still are. This has a church process of some form to allow a new marriage in some cases.

For Roman Catholics, this follows the annulment of the previous marriage, a costly and time-consuming process that declares the first marriage to have not existed, to not have been valid. Pope Francis has already set up a committee to examine the possibility of simplifying the procedure. He is very aware that on some Vatican rulings on sexual ethics generally ordinary Roman Catholics now assume ignoring the rule is the norm. Humanae Vitae, against using artificial contraception, would be the most obvious example.

Many Anglican Churches have moved on, following an approach not dissimilar to Cardinal Walter’s, or further. And many are now following this trajectory, although Cardinal Walter attempts to deny the consequence of his thinking (I think his denial is weak), and are seeing God’s marriage-type love evidenced in committed same-sex couples.

An obvious drawback of the Vatican process is that discussion is primarily amongst older, intending-to-be-celibate males. 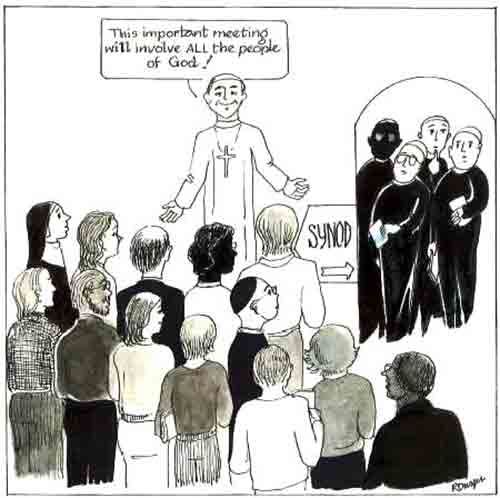 You can draw your own parallels between that and the debate about committed same-sex couples.

Update 8 October: here is Peter Carrell’s blog post on the topic with a link to the NZ RC Bishops Pastoral Letter on the Responses to the Preparatory Document for the Extraordinary Assembly of the Synod of Bishops