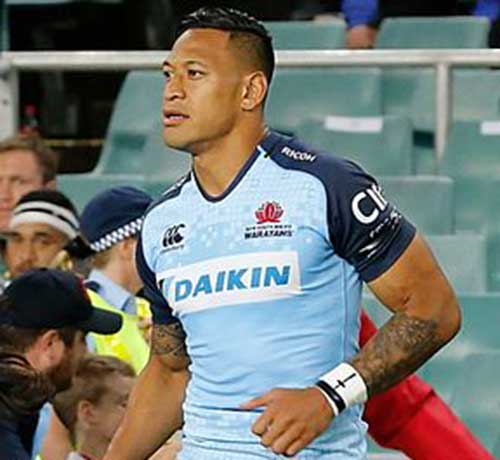 There’s a lot of heat being generated in Downunder Australasia with a Bible verse being bandied around by everyone from sports heroes to journalists saying that homosexuals will go to hell. But, what if the Bible verse they so casually quote doesn’t mention homosexuals at all? Are the journalists actually doing their job responsibly? Where are the bishops and church leaders saying: “Hang on a minute – your translation from Greek to English just may not be correct?!”

It began with a question to Australian professional rugby player, Israel Folau, on his Instagram. Israel is married to NZ Silver Ferns (the national team) netball player, Maria. Rugby and Netball are like religions in sport-loving Australasia.

The question on Folau’s Instagram that he chose to respond to was: “What was God’s plan for gay people?” Folau decided to respond: “HELL… Unless they repent of their sins and turn to God.”

Some of the balance we need to bring to the heated debate is to emphasise the importance of freedom of speech and the right of diverse religious beliefs. This is also an invitation to reflect on the appropriate edges to this freedom. When does freedom of speech tip over into hate speech? There’s a lot in the Bible about executing people for doing what is pretty commonplace in NZ today (disobeying your parents, collecting sticks on Saturday, a woman who is not a virgin on her wedding night,…). When does advocating for such biblical ethics tip over into being unacceptable? NZ has very limited legal restrictions on speech – attacks on religion and sexuality are not included. Is this an invitation to review our law?

Others have focused on those issues, and are doing so well. But, I want to focus somewhere else. Israel Folau expanded his original response and pointed to the Bible’s teaching “specifically 1 Corinthians 6: 9-10” which he gives as:

This is from the ESV translation, the translation that I have previously called, “the Bible as some people wished God had written it”.

Let’s look at what the ESV translates as “men who practice homosexuality”. [Already NB: no mention in Folau’s quote of lesbians. Oops, I forget, “men” can be inclusive of women in the ESV.]

The word Paul uses here (that Folau’s translation has as “men who practice homosexuality”) is ἀρσενοκοῖται (arsenokoites). First important point: this occurence in Paul’s letter to Corinth is the FIRST TIME this word ever occurs in Greek literature. Ever! Maybe Paul didn’t make the word up – maybe it was used by people in conversations – but as there is no earlier usage in writing, we have no idea from that what the word means. It is only used once more in the New Testament (1 Tim 1:10), and the usage there is no help at all to trying to work out what St Paul might mean by this neologism.

The best scholarly guess is that Paul made up the word by combining two words, “male” (ἄρσην) and “bed” (κοίτη) from a sentence in the Greek translation of the Old Testament (the Septuagint) that he was using:

Only in the 13th Century, long past the word’s common usage – if there was one – does arsenokoites become used by some people to describe homosexual activity.

In case readers now point to Leviticus 18:22 (the possible origin of Paul’s neologism), ripping it out of context and oversimplifying translation principles – let me emphasise that, again, the best scholarly guess for that complex verse is an admonition against pagan sexual worship practices and shrine prostitution.

So, now to the two groups who could do better.

In the clip, NZ Prime Minister, Jacinda Ardern, of Mormon background, can be forgiven for not being theologically agile, but the KJV Bible she grew up with would not have mentioned the word “homosexuals” at all – including in the verse constantly referred to.

We thought it was worth noting that according to Corinthians it’s not just practising homosexuals who will miss out on inheriting the Kingdom of God, the list also includes adulterors, thieves, the greedy, drunkards, and swindlers, among others.

Well – no, Tom. Some of those others may be clear “according to Corinthians”, but whether the list actually includes “practising homosexuals” is not at all clear. That is strongly disputed.

If people cannot see that this is journalists not doing their job properly: imagine such treatment around some heatedly disputed Muslim text or practice, and tell me that it is responsible journalism to not indicate that there is significant debate around. The controversy around homosexuality in Australasia, particularly between Christians, is well known – notably to journalists. Journalists could have checked with Christians holding a different perspective. Or even just looked on Wikipedia which presents the controversy around this particular Bible verse.

The second group that I think deserves to be challenged is bishops and other significant Christian leaders in Australasia: it’s fine and nice to stand up for freedom of speech. But where are the high-profile public statements that the verse being bandied around may not at all mean what Folau says it means?

Once again, the narrative that has won the day in Australasia (and beyond), both within the church and for those who do not call themselves Christian, is this time not that Christianity is anti-science, but that Christianity is also condemnatory of committed same-sex couples, and that those Christians who hold positions either in favour of science or who are supportive of committed same-sex couples do this by ignoring the Bible’s teaching.