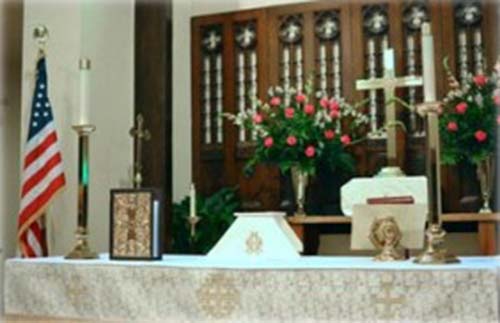 Principle 5: The essential elements should always be highlighted, not hidden or dwarfed.

The fifth principle, above, comes from Celebrating the Eucharist

The most important things on the Lord’s Table are the bread and wine. In many congregations, however, the bookstand is the visually dominant item. By virtue of its size and, in some cases, its ornamentation, it demands attention. Next to it, a shallow dish of paper-thin wafers does not stand a chance. What are the essential things when the church celebrates the Eucharist? Which objects are indispensable and bear the greatest theological weight? These questions apply not only to what is placed upon the altar, but to every object and every action in the liturgy. (page 23)

Again, and again, and again, I have written and spoken about the tendency in worship to put the emPHAsis on the wrong syLAble. I have advocated placing the copy of the Eucharistic Prayer flat on the altar table. Using a bookstand inevitably results in giving the impression that the presider is involved in something akin to cooking and checking the recipe. I regularly see presiders in orans leaving one hand skywards and turning the page on the bookstand with the other. If previously the presider was mimicking a cook, now it is a fencer dueling in a swordfight who is being imitated!

And then, of course, there are still communities that insist on using burse and veil with clergy performing arcane rituals with these objects at the end of which the burse stands vertically, tent-like, and the veil hangs on the congregation-side of the altar incongruously, asymmetrically, and distractingly often clashing with the altar frontal.

Add oversized candles and flowers, and a microphone, and one can understand the triumph of the pernickety, fastidious person in our shared liturgical life.

Please don’t limit your reflection on this to the altar table during the Eucharistic Prayer. This is merely one example of not letting the main thing be the main thing, where liturgy gets cluttered in word, sign, and symbol as Patrick Malloy quotes the well-known Percy Dearmer, “the evil in all religious customs, throughout history, has been the piling up of trivial details”. Patrick Malloy goes on to say that “The problem with ‘the piling up of trivial details’ is that they dwarf and strangle the essential things… The pastoral task is to distinguish the ‘trivial’ from the enriching in liturgical objects, texts, and actions.”