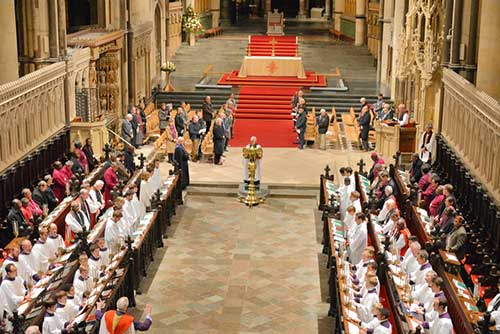 We can learn a lot about liturgy from one of the discussed tweets about last week’s meeting of Anglican Primates. The tweet was:

At first, I couldn’t get my head around it. Surely we spend the whole of Evensong in prayer? Isn’t that what Evensong is? What would one expect to be doing in “large parts of service”? From an archbishop?!

Someone explained, “The Abp always prays during the Anthem…he is v unmusical.” A friend expanded the explanation: he took the tweet to mean that when the rest of us are staring into space, listening to the Magnificat with heads up admiring the choir, Archbishop Justin Welby was on his knees.

From this I had three connected reflections:

1) Many Christians, including many Anglicans see liturgy as being a show. There is irritation if the quality of the choir is questionable, the verger doesn’t verge well, the robes are creasy, or the procession sloppy. There might be a moment or moments of and for prayer in Evensong, but the thought that the whole of Evensong is an act of prayer might be something that people say but in practice it is not an experienced reality. Spending “large parts of a service in prayer” is so unusual it is tweetworthy.

2) For many Christians, including many Anglicans, prayer happens when we kneel. “Let us pray” is often an Anglican cue – polite Englishness for “please kneel”. Sitting doesn’t work for these people to pray – unless possibly you bow your head. I don’t know what these people think we are doing when we all stand during the Eucharistic Prayer – certainly it is not that we are all praying. I guess we are standing so we can all see the show better.

For the archbishop to be seen to pray at Evening Prayer means he is on his knees, and he is doing this because clearly something has happened.

But wait, there’s more! In connection with the first sentence in the tweet, Jim Naughton said it succinctly:

The big news from the first day of the Anglican Primates meeting was which primates put on vestments for evensong [and who processed]. The big news on the second day was which ones attended evensong. I can’t for the life of me understand why the world doesn’t take us more seriously.

On the third day, of course, “the news is that all of the primates ARE BACK in evensong.”

And it doesn’t seem to be improving. The Episcopal Cafe explains:

Church Times reports Archbp Foley of ACNA says he voted during ‪#‎Primates2016‬ (except on No. 7 of the communiqué); the director of communications of CofE says it was made clear Foley should not vote; #Primates2016 affirms; CT says ACNA says CT reporting is accurate. Confused yet?

And that is helpfully clarified by the Rev. Susan Russell:

So now the story becomes did the guy who had no standing to be in the meeting in the first place get to vote in the decision to censure the Episcopal Church they had no authority to make? And we wonder why the church appears more and more hypocritical and irrelevant to the world God has called it to serve.

8 thoughts on “Liturgy Is A Show”