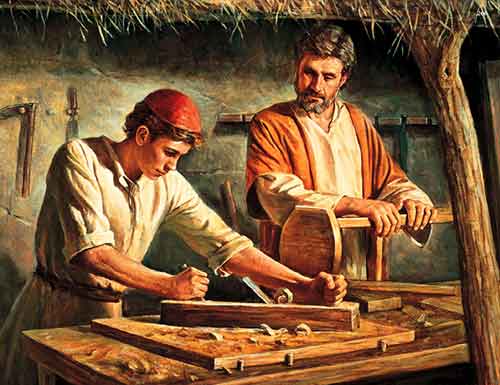 You can imagine Jesus in his teenage years. He’s had his basic, solid education, and now it’s time to start learning his trade. Obviously, he’s his dad’s apprentice. Joseph is a good tradesman; they live less than an hour’s walk away from Sepphoris. There’s a massive city-rebuilding project underway there – much like we are seeing starting up here in the centre of earthquake-ravaged Christchurch. Sepphoris had rebelled against Herod’s rule about 4BC; it had been destroyed; and now, under the rule of Herod’s son, Herod Antipas, it was being rebuilt as the Ornament of Galilee.

Joseph had good, steady work there. His craftsmanship was admired. He was admired. And now his young son, Jesus, was joining him on the building site.

Jesus was so proud of his dad, of his dad’s good name in Sepphoris and beyond, and of the work that his dad did. Jesus realised that Joseph’s skills took practice and practice. Jesus found that as Joseph’s son he could do nothing on his own; as he was learning the trade – he would do what he saw his dad doing. And whatever Joseph did – Jesus would do likewise.

Joseph obviously loved his son, Jesus, and he would take great care to show him all that he himself was doing. Joseph would regularly say to Jesus, “I’m going to show you greater works than these; you will be astonished.”

Years, and years later, more than a decade later, Jesus found himself attracted to join a seemingly eccentric band of people who followed an unusual leader – a man who dipped people under water and gave them a fresh start, new meaning, peace, joy, purpose, God.

When Jesus tried to put into words what this reality was, this ‘reality’ with a capital R, this one most people call “God” – the best image, the best title, the best name Jesus could come up with, was that of his dad. Jesus wrapped awe and intimacy into that one word: “dad” – abba in his language, daddy.

And when he was asked how you could relate to the one we call “God” he responded by saying, pray something like this: dad – not referring to our earthly dad – dad of the universe; dad of us all; our heavenly dad – may your name be held in awe.

If your image of dad is quite different to Jesus’ image – what would be your image that would attract you to grow into your relationship with the source of the universe?

Maori makes it simpler – matua – parent, ‘Mother and father of us all’.

Maybe for some of you it might be ‘friend’.

Those around Jesus were scandalised that Jesus called the source of the universe, ‘dad’. They were used to the awe side of understanding God, but they couldn’t cope with Jesus’ intimacy with God, Jesus’ close friendship with God, Jesus seeing himself being like a son to God, being like an apprentice relationship with God:

19 Jesus said to them, “Very truly, I tell you, the Son can do nothing on his own, but only what he sees the Father doing; for whatever the Father does, the Son does likewise.
20 The Father loves the Son and shows him all that he himself is doing; and he will show him greater works than these, so that you will be astonished.
21 Indeed, just as the Father raises the dead and gives them life, so also the Son gives life to whomever he wishes. [John 5:19-21]

Jesus was prepared to die so that we could pray words like:

Our Father in heaven; hallowed be your name.

This is the fourth post on the Lord’s Prayer;
the first is Lord, Teach Us to Pray
the second is Our Father
the third is Our Father (part 2)