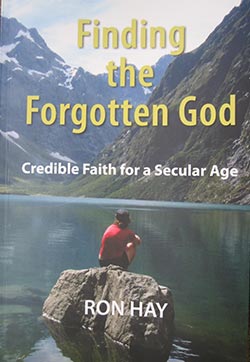 On Sunday, Ron Hay launched this book on apologetics that he has been working on for some years now. I have known Ron for many years; we overlapped at our time at St John’s College, training for the priesthood. Both Ron and I came with a background of secondary school teaching. He was an English teacher. He went on to be Vicar of a thriving parish, and in retirement regularly writes religious opinion pieces in our local newspaper, The Press.

I am delighted to have this book he has been working on. It is attractively presented, easy to read, well set out, with clear headings, subheadings, and interesting longer quotes, each set in a box, with a different font, and headed up “Voices”. In fact, there is a lot of quoting widely, with good notes, but not so that it becomes cluttered. An index would have been a helpful addition.

The style makes it a book anyone with a general interest would be able to pick up, enjoy, and learn from. So this can be a book that you can give to others who are interested, or have available as a resource.

Ron’s book includes: evidence for God, revelation, the Bible, Jesus, the crucifixion, the resurrection, the problem of evil, science and faith (including evolution-creationism), and other religions. Towards the end, there are testimonies (“Personal Faith Stories”) of a number of Kiwis.

Ron’s approach is clearly within the evangelical stable. His chapter on the cross assumes that Christ dying “for us” and “for our sins” means penal substitutionary atonement. But his God is a positive image; his Jesus, one whom people would want to know.

His chapter on the reliability of the Bible really only focuses on the historical reliability of the Gospels. He is much indebted to Richard Bauckham (a favourite author of mine); I think other approaches cannot be so easily discarded. Zechariah’s dumbness being cured upon writing “His name is John” cannot be put in the same historical certainty, IMO, as Jesus being baptised by John, as just one example.

Creationists and antitheists (Ron’s “New Atheists”) have won the media battle in the regular assumption that Christians are anti-evolution, anti-science. So Ron’s chapters on these prejudices are very welcome. We need to, again and again, get this message out. And the silence of our church leaders on that is deafening, resulting in the bizarre spectacle that the Pope assuming evolution and the Big Bang is somehow newsworthy! I would have appreciated Ron including John H. Walton’s idea that Genesis 1 is not about about the material cosmos coming into existence.

Christianity, claiming to be a revealed religion, needs to be open and honest about its problems (an approach humbly followed by Francis S Collins in his wonderful book The Language of God, a book Ron mentions): how is it that Christians cannot agree on some of the most fundamental beliefs and practices, as just one example? More than other religions, the multiplicity of (evangelical) denominations, churches, and communities, disagreeing with each other is something we need to honestly, humbly acknowledge.

But atheists (and agnostics – those who say one “cannot know”) also need to be open and honest about their problems. At that point some fruitful dialogue can begin. And I think the apophatic approach, much neglected in Western (and evangelical) Christianity, may be a doorway into that dialogue.

Ron’s book, I hope, will get many people started on an open discussion. I too often meet Kiwis who assume that “belief in Jesus” is equivalent to “belief in the Tooth Fairy”, who have no idea of the intelligent debates happening within Christianity, and of Christian appreciation or, and involvement in, scientific explorations, to name just a few examples. May Ron’s book help to eliminate such prejudices, and have more people realise that one can be both a Christian and intelligent.

1 thought on “Finding The Forgotten God”