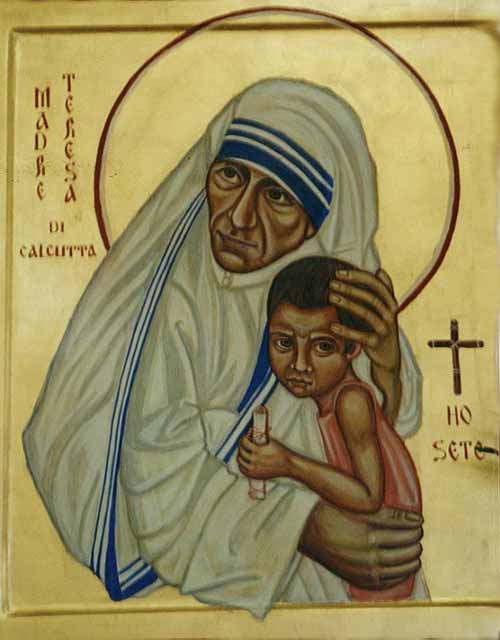 I vividly remember meeting Mother Teresa when she visited Christchurch in 1973. Diminutive and looking quite fragile, she greeted the small gathering with radiant joy – she was then still relatively little known (her Nobel Peace Prize was 1979), so we could meet her individually. In 1981 I visited the Home for the Dying she had established in Calcutta (Kolkata). I have seen her communities of Missionaries of Charity active in many parts of the world.

In 2006, I put a motion to our diocesan synod asking that the Common Life Liturgical Commission review our church’s calendar.

As part of my 2006 motion, which passed, I gave some suggestions.

was one of those suggestions. The Common Life Liturgical Commission did not go on to review the calendar as requested, but did put my suggestions to General Synod Te Hinota Whanui (GSTHW) in 2008. Mother Teresa passed that meeting of GSTHW, the majority of dioceses and hui amorangi also accepted that, and the 2/3 requirement at GSTHW 2010 also passed. So, after the required year of seeing if there were any objections, Mother Teresa was formally on our calendar (as a formulary) in 2011.

Other Anglican churches, though they have revised their calendars recently (eg. Holy Women, Holy Men – TEC; Common Worship – CofE) have not added her. There is a tradition, amongst many Anglicans, of waiting 50 years after a person’s death before adding such a person to their church calendar. That may have been part of why she is not on these calendars.

I am certainly aware of some of the controversies around Mother Teresa – her approaches to the poor, to her fame, to her communities, and so forth. Without reducing or rationalising these flaws, I am not needing to have her perfect.

There was also controversy when the book of her private writing, Come Be My Light, was published, revealing the decades of lack of spiritual experience that she lived with, her darkness. I actually find her darkness encouraging. In 1959, she wrote: “If I ever become a saint—I will surely be one of ‘darkness’.”

We are, until November 8, in Pope Francis’ Holy Year of Mercy. The canonisation of Saint Teresa is a highlight in this year and its focus. She is an icon of the year, even, possibly, of his pontificate.