The Prayer Wheel: A Daily Guide to Renewing Your Faith with a Rediscovered Spiritual Practice – by Patton Dodd,‎ Jana Riess,‎ David Van Biema.

This medieval (900 years old) prayer wheel was recently rediscovered. It takes four basic Christian texts – the Lord’s Prayer, the Gifts of the Holy Spirit, scenes from the life of Christ, and the Beatitudes – and divides them into sevens. On the wheel these are aligned in fascinating ways.

I really like the way that this book was introduced in the article sent to me by David Allen, a regular contributor on this site:

“Oh crap” is what I am usually saying right about this time, the day before Lent begins. “What the heck am I going to do for Lent?”

I’ve done it all: given up meat. Given up chocolate. Given up TV. Given up unnecessary spending.

And then after many years of those small sacrifices I gave up the giving up, because it wasn’t “working” – it wasn’t bringing me any closer to God, however good it may have been for me on the self-improvement front. Lent isn’t about self-improvement; it’s about a journey to God.

It is the common cultural view of Lent, isn’t it – a time to give up stuff that is generally bad for you and you shouldn’t be doing them at all, Lent or no Lent. The movie, 40 Days and 40 Nights, is a typical example (about a guy who gives up a promiscuous sex-life for Lent).

The Lent-is-about-giving-up-stuff approach dovetails well with the common cultural view that the Christian God is against fun – including alcohol, chocolate, and sex.

And this Prayer Wheel looks like it has wonderful potential to help with that.

I have ordered the book. I have joined the facebook group. I can visualise helping others make connections in homilies… OK, it’s already halfway through Lent – but I think this might help you (and me) beyond Lent… 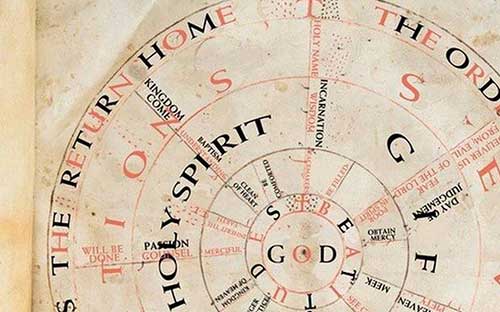 3 thoughts on “The Prayer Wheel”