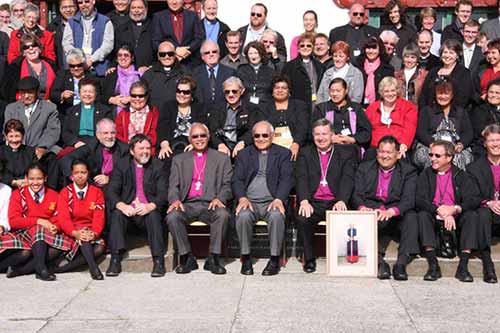 The 63rd General Synod Te Hīnota Whānui will be held in the week of 4-11 May, 2018, in New Plymouth, New Zealand. Here are some brief reflections – particularly around discussions and decisions around worship.

All the Reports, Bills, and Motions are presented in a well-organised manner here.

Here is the Report of the Common Life Liturgical Commission.

The report begins by noting that Bishop Te Kitohi Pikaahu stepped down as Chair two years ago, and that The Venerable Carole Hughes has been Chair during the last two years. If that information has been communicated previously, I missed it. If the information is available on our Church website, I cannot find it.

Amongst many other things, Carole is the author of the book, Doing Liturgy in Season (2009). This is a collection of liturgical resources for seasons of the church year. They are creative and contemporary and encourage writing one’s own material locally. Eucharistic prayers included go beyond what is authorised in our Church, and this came under some criticism. Why all this is significant will become clear below.

I look forward to the publication of the history of A New Zealand Prayer Book/He Karakia Mihinare o Aotearoa (ANZPB/HKMA), and the printing of a revised Prayer Book – both to happen this year. I look forward to seeing what is included and what is excluded in our new Prayer Book printing (eg – the now-pretty-redundant Two Year Cycle of readings) and how that might affect pagination.

The report announces planning underway for the 30-year anniversary of the publication of ANZPB/HKMA (Advent Sunday 2019). Liturgical Bills presented to GSTHW are listed, but little explanation or introduction is provided for their rationale. Some notes are provided here.

Changes to Forms for Ordering the Eucharist

Our Church has two different formularies (agreed teaching/practice) of frameworks for eucharistic services:
1) A Form for Ordering the Eucharist (NZPB/HKMA pp 511-514)
2) An Alternative Form for Ordering the Eucharist
The second Form (2) is much more flexible in the Eucharistic Prayers it allows – these can be any authorised by the equivalent to GSTHW anywhere in the Anglican Communion. But such flexibility of Eucharistic Prayers can only be done within the context of a much more restricting framework (you must use two readings, plus the Gospel, plus a psalm,…). The first Form (1) encourages music, dance, other art forms, and only requires a Gospel reading.

Bill 11 amends (1) to allow the use of Eucharistic Prayers authorised here or elsewhere in the Anglican Communion (ie. the provision already available under 2). This seems to be the most obvious legislation for where our Church is currently at.

We are a Church with the widest liturgical allowance in Anglicanism. Even with such flexibility, clergy use and create resources beyond the edges of what we have agreed to.

The Alternative Great Thanksgivings would be allowed by a revised (1) and already by current (2). Authorised by GSTHW, they started their life as suggested experimental prayers written by Rev. Dr Ken Booth (with some last-minute pre-Christchurch synod tinkering by me). GSTHW, however, set them off to be formularies of our Church – they have no provision for flexibility, proper prefaces (seasonal variation) as such prayers obviously should. This could be a straightforward development for GSTHW to encourage.

The Great Thanksgiving provided in NZPB/HKMA (pp 512-514) for (1) could do with some tidying up – addressed to God, the First Person of the Trinity, we ask that we might be God’s body (rather than the usual Christ’s body) – another straightforward development for GSTHW to encourage. All eucharistic prayers that I have written in Celebrating Eucharist conform to this framework.

There is no provision, in any of the Bills, that if Eucharistic Prayers are used from elsewhere in the Anglican Communion that the responses might be adapted to the ones we know so well here (“The Lord is here…”). That is a lack – but surely agile clergy make such adaptation intuitively, and I am sure there would not be discipline in our Church against those making such obvious changes. Yet another straightforward development for GSTHW to encourage?

Bill 12 is an alternative to Bill 11. It is far more restrictive – beginning a process of curbing the use of Eucharistic Prayers from the wider Anglican Communion. This may very well signal a legislative attempt to try and squeeze the toothpaste back into the tube, but I think such an approach – of tightening legislation – will be unsuccessful. As indicated above, it appears a surprising proposal under Carol’s leadership.

I have been present (as many readers will have been) at Eucharists with a variety of “eucharistic prayers” – homegrown and borrowed. They have varied from solely reciting a Last Supper story (1 Cor 11:23-26) to a meditation on Christ as the Bread of Life addressed not to God but to the congregation. Those in authority over our Church have tended not to get involved. Breaches of our liturgical agreements have tended to be by people at the end of the spectrum that is now most vocal that blessing committed same-sex couples would be breaching our liturgical agreements!

To prevent any confusion: if GSTHW passes any of these bills, this is but the first stage to a complex process which includes passing by a majority of diocesan synods and hui amorangi, a return to a newly-elected GSTHW where it must pass by a larger majority in all houses, and then a year for anyone to protest before it becomes agreed teaching and practice (a formulary of our Church).

My fear is that, as has happened previously, GSTHW will be so caught up in the debate about gays that there will not be serious discussion around liturgical decisions. Previously GSTHW members have returned and had no idea of the liturgical decisions that they were part of!

Bill 13 is presented as an option only if GSTHW chooses Bill 12. Bill 13 seeks to draw back permission to use eucharistic prayers from the Anglican Communion. It would restrict (2) to only what our own Church has authorised.

I can see no mention of the fact that if Bill 11 passes and ultimately becomes a formulary of our Church, then (2) An Alternative Form for Ordering the Eucharist may continue to have educative value, but as legislation it would add nothing to what is allowed under the updated (1) and could be scrapped.

Bill 8 confirms optional Trinitarian collect endings. The proposal clearly has “may” as the rubric – these might not be the endings that I would have written, but the “may” provision underscores that I may use other endings – including endings I produce myself. There is an alternative bill (Bill 6) which, essentially would not confirm the assent of the diocesan synods and hui amorangi and restart the process with an alternative.

The alternatives of Bill 6 are already allowed currently and if Bill 8 passes. I continue to think it unusual that in our formularies we would refer to, and include, formularies of the Australian Anglican Church. I cannot imagine any other Church doing this (do you know of any?), but hey – we’re not just any other church!

There are other liturgical debates that people may wish to comment on below. And then there’s, I gather, apparently a discussion about committed same-sex couples – which, in essence, is a liturgical discussion.