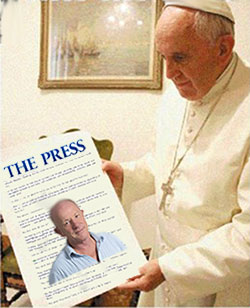 Recently NZ columnist Joe Bennet wrote to the Vatican urging it to ditch the theology and just focus on being good. Here is the Vatican’s reply:

We at the Vatican don’t usually read your columns, being tired of the hackneyed anti-religious, straw-man arguments, or as your guru, Dawkins, would say, “meme”. But since this time your letter was directly addressed to us, and as we are sorry we didn’t reply last time (as you noted, things have changed a bit around here since you last wrote) – it’s time you got your letter.

Darwin is not an issue in the Vatican. Christians at the time of Darwin built churches with stone showing fossils in their sanctuaries as part of visibly demonstrating there is no conflict between sacred and science. Evolution only appears as a problem, in relation to the Biblical stories, for people who do not understand different types of truth, different epistemologies, and the ways that story and metaphor work – people like Professor Richard Dawkins.

Dawkins is an insightful biologist. He has helped people understand Darwin’s theory of evolution and its mechanisms, but he lacks qualifications to expound about philosophy or religion, is clearly quickly out of his depth in those areas, and only those who think that there is nothing more to education than skilfully using Google believe that his expertise in biology can handily be extended to accepting everything else he might say on any other topic whatsoever.

You will remember, of course (and if you don’t you can Google it), that “Big Bang” was a put-down, coined by a great atheist scientist, who went to his grave this century believing that the universe did not have a beginning, against the priest scientist who was convinced that it does. Google can again help you if you cannot recall the long procession of devout Christians on whose painstaking research much of today’s science is based.

You claim that “The mission statement as laid out a couple of thousand years ago in Aramaic just won’t cut it in the 21st century” and then, without pausing for breath, you go straight on to say, “what will cut it is goodness, kindness, humility, warmth of heart, modesty and loving kindness” – which, in fact, is essentially that very mission statement only now translated into English (and to be found in one of the two great foundational sources of modern English – the other being Shakespeare)! The English word for for the source of these qualities is “God”, and we agree with you that “People have always been drawn to it, and right now they’re begging for it.”

Then back you go to your statements (why sully a good presupposition with knowledge, facts, or research): “once you’ve turned your back on hocus pocus, as the secular west has, you can never return to it”. Well, sorry to spoil your prejudices, Joe, but the west hasn’t. Your secular west is more into hocus pocus in your post-modern, you-can’t-challenge-this-because-it’s-true-for-me, secular age than it ever was in the Christian period which launched science with the belief in an objective, able-to-be-studied, consistent, God-made reality.

Just look around your own country, one of the most secular in the world. You can barely have a coffee without being confronted with flyers for chakra-clearing mindfulness visualisation, or go to the pub and miss overhearing conversations encouraging blood-moon renewal rites to recharge the crystals for sale in corner shops from Lyttelton to Levin. Secular westerners earnestly make their own personal, unquestionable smorgasbord worldview from practices such as past-lives therapy, aura reading, psychic detectives, crop rings, biofeedback, horoscope, occult, lucky numbers, and more secret updates to the best-selling The Secret (If you really want to make it as a writer in your secular west check out the bookshops with the bursting shelves of the ever-expanding New Age-Inspirational-Self-Help area).

But here’s my advice: get ahead of your own game for once. Accept that your secular, New Age, post-modern goose is cooked and that if you want to be a serious player in life you must ditch the lot and just concentrate on the stuff that’s true and good.

Leave the presuppositions to those limited to Google and Answers.com and come and actually study some Philosophy of Religion.