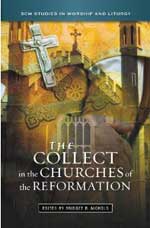 I am delighted to have read this book – one of the most recent on contemporary collect scholarship, and with a particular (but not exclusive) focus on churches of the Reformation.

Lutheran scholar, Frank Senn, characterises a collect by a five-part structure
(1) addressed to God (Deus)
(2) an attribute or action of God or Christ
(3) a petition that states the purpose of the collect
(4) a reason for or a consequence of the peition, and
(5) a termination.
Parts (2) and/or (4) are missing in many collects.

Anglican liturgist, Donald Gray, is the only one to significantly mention A New Zealand Prayer Book He Karakia Mihinare o Aotearoa in the book (page 61). He describes how each celebration has three collects provided, one often being “a modern version of a 1662 collect. The others are much briefer,” he concludes politely, “barely conforming to the traditional collect structure.”

The book stresses how difficult it is to write a collect. They need to be trialed over a long period of time. There are dangers of being overly archaic, and long. There are contemporary problems with the relative clause. The vocative has been all but abandoned.

We are reminded of the tradition of memorising the collect for the week, and the discussion of reducing the number of collects to focus on those with greater depth, repeating some collects beyond a week.

There are discussions about attempts to link the collect with the readings. The Church of England has unlinked them after Pentecost – CofE’s Common Worship follows the Revised Common Lectionary (RCL) for the readings (these are assigned by the date of the Sunday) but the collects are assigned independently, being appointed by the number of Sundays “after Trinity”. The RCL, of course, does not have a “theme” for readings after Pentecost, so the search for a collect that connects to all the readings is completely mistaken.

Donald Gray begins his essay, “It can certainly be claimed that there is no more characteristic Anglican liturgical ingredient than the collect…The collect…most importantly, acquired both a status and a tradition in its own right in the Prayer Books for the Church of England, and consequently in the Anglican Communion, which has never been seriously challenged.” (page 50).

Another well-known Anglican liturgist, Michael Perham, writes about the “adaptability of the collect…its stark simplicity will frequently draw people back to it as a timeless art form when more discursive forms of prayer wear thin.” (page 196).

As well as Anglicans, the book has scholars from the Lutheran, Calvinist, Methodist, Baptist, and Roman Catholic traditions.

For me it was a particularly important book to read in the week that General Synod Te Hinota Whanui (GSTHW) will meet to vote on a revision of A New Zealand Prayer Book: He Karakia Mihinare o Aotearoa. The revision on the table will move from having the three options (mentioned above), at least one usually being clearly a collect, to assigning only a single prayer to every celebration, spread across three years, in the mistaken understanding that it connects to some sort of “theme” of the often-unrelated readings. Many of the prayers are not collects in the description of this book, and so this is the first-ever serious challenge to this characteristically Anglican liturgical ingredient in the Anglican Communion. I hope the revision will lie on the table and not receive GSTHW’s assent, but be sent back for further work.

I am happy to recommend this book. It is a good introduction to studying the collect in various churches of the Reformation. It is not an introduction for the liturgical novice, however, and assumes some already introductory knowledge of the collect tradition.

5 thoughts on “Collect in Reformation Churches”